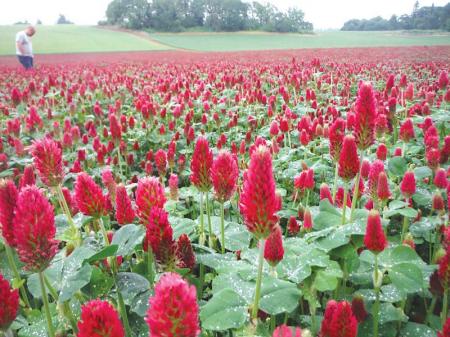 With more than 300 species of clover in the world and very few commercialized, the company had a lot to pick from.
We started developing new clover varieties in the mid to late 2000s when fertilizer prices spiked through the roof, says Jerry Hall, co-founder, GO Seed. We found the primary clovers being marketed went back to a USDA study in the late 1800s. The first year we planted 28 species in a couple thousand small plots. We knew they would deliver nitrogen, so we started exploring for other traits.
Those traits included cover crop compatibility, regrowth, and cold tolerance. The company also screened for more unique traits such as soybean cyst nematodes (SCN). Hall explains that some century old varieties of red clover are excellent hosts for SCN.
We were able to identify varieties that were non-host or poor hosts to SCN, says Hall. With cover crops, you have to rule out doing any harm, and you dont want to be a green-bridge that exacerbates nematode problems.
Initially, the company concentrated on annual clovers for green manure. Late maturing was a key desirable feature. It translates into more cuttings and less chance for unwanted reseeding. The latter is especially important in row-crop cover crops.
There were a ton of annual clovers that had not been commercialized, waiting to be looked at, says Hall. It was low hanging fruit. When cover crops took off, we looked pretty smart, as we were already 10 years into our breeding program.
GO Seed currently has 3 multi-tasking annual clovers, and a stress handling perennial white clover. FIXation Balansa grows up to 3 ft. high with stems as long as 14 ft. It can create as much as 300 lbs. of N per acre with a compacted soil-busting deep tap root and potential forage yield of up to 96,000 lbs. per acre.

Frosty Berseem is late maturing compared to most other annual clovers and is favored by pollinators over red clover. With a plant structure (high leaf-to-stem ratio) similar to alfalfa, it makes high quality hay, has excellent disease resistance and can produce more than 4 tons of hay from a spring planting. Ideal as a cover crop, it can fix more than 150 lbs. of N per acre, pull up high value nutrients from deep in the soil, and provide a net return in nutrients alone of more than $75 per acre.
Kentucky Pride crimson clover flowers up to 2 weeks later than other crimson clovers, handles cold temperatures, and out-produces competitors. It has been shown to create as much as 100 lbs. of N, has longer roots and produces 4 times the biomass of Dixie, a leading competitor, according to Hall.
AberLasting is a unique, new perennial clover that is a cross of white and Kura clovers. White clover is the most widely used forage legume for grazing, known for N fixing, fast growth, digestibility and high protein. However, it doesnt stand up well to environmental stress.

Kura, a Caucasian clover, is similar nutritionally to white clover, but handles extreme stress conditions better. AberLasting establishes faster than Kura, maintains leaf water content 50 percent longer than conventional white clover, and can survive temperatures down to negative 22°F. Under heavy grazing, AberLasting recovers faster and maintains ground cover better than conventional varieties.
"FIXatioN and Kentucky Pride can survive down to Zone 5 on the USDA cold hardiness scale," says Hall. "Frosty Berseem can survive Zone 7 and even most of zone 6, if snow cover is there to insulate the plants. AberLasting is a fairly new product and we are still learning about it.  However, we had producers plant it last year in Canada, and it handled the winter. One site had some cold damage, but it is recovering just fine."
Grassland Oregon is continuing to develop clovers and other species. The company is even looking at a turf grass mix that includes clover.
"We have a mix with clover, wildflowers and a novel wild fescue that stops growing at 4 in. in height," says Hall. "It should reduce mower frequency. We are also looking at species that have superior potential for carbon sequestration."
Contact: FARM SHOW Followup, Grassland Oregon, 4455 60th Ave., Salem, Ore. 97305 (ph 503 566-9900; marketing@goseed.com; www.goseed.com).