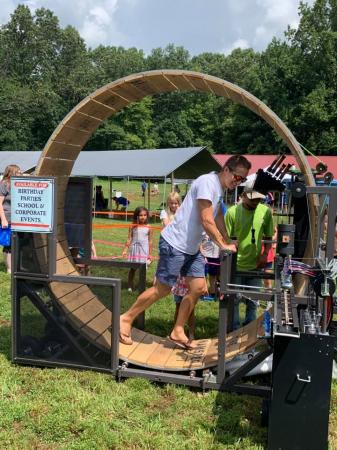 Pennsylvania inventor Philip Baum combined the unlikely mechanics of a hamster wheel with those of an ice maker and snow cone machine to produce what he calls a You Are The Hamster snow cone  machine.  He got the idea after seeing a motor-driven ice cream maker.

Six months later hed built a human-size wheel made out of wood and sheet metal, and learned through trial and error that it needed brakes and a stronger frame. Now his 4th generation metal frame versions have operator-activated brakes and a finely tuned ice making system.

Baum says the ride is a human-sized hamster wheel which powers an ice grinder positioned alongside a custom-built conveyor belt. Stops along the belt include a mechanical ice filler,  grinder, a rubber mallet ice compactor, flavor spigots made from shower heads, and a place to stop at the end for receiving a spoon before the participant is presented with their cold creation.

My wife, son, daughter-in-law, and I run wheels out of Pennsylvania and Tampa, Fla., where they live. The two families operate 5 wheels and have traveled up and down coastal states attending fairs, festivals, private parties and fundraisers. We usually have parties and events scheduled every weekend between April and October in the Northeast, and most weekends year-round in Florida, Baum says.

The business has proven to be a big hit and a worth-while financial investment. Weekend events in the Northeast last year brought in more than $10,000. The minimum cost for booking the machine at an event is $249 for two hours. Additional hours are $100. The Baums add travel charges if an event is more than an hours drive. Baum says the device is so intriguing that people stop in to just watch it operate. They dont offer free rides. You have to buy a cup of the refreshing shaved ice if you want to take a spin, says Baum. An 8 ounce cup is $4 and a 12 ounce cup is $5.

Baum says one wheel operator can handle up to 40 snow cones per hour and adding a second operator moves volume up to 60. We find that events with lots of kids tend to do better, even though about 30 percent of our participants are adults, Baum says.

Now that Baum has business experience and a proven wheel concept, hes designing a wheel to sell and hopes to have it complete by early 2021. The equipment will be transported on a 5 by 8-ft. re-inforced utility trailer with tie-downs. An assembly tool kit has spare parts. Baum says the wheel setup will cost about $9,000 and the optional trailer and tool kit are $1,000 and $200. Buying one will include one day of training for the operator.

Baum says the equipment can be set up and operated by one individual in about 30 min.  It fits through a 36-in. doorway before setup if an event is indoors. The assembled wheel is 93 in. tall, 95 in. long and 86 in. wide at the conveyor. Hes also working on a wheelchair accessible design for the spring of 2021.