Rumely Built From The Ground Up With Scavenged Parts 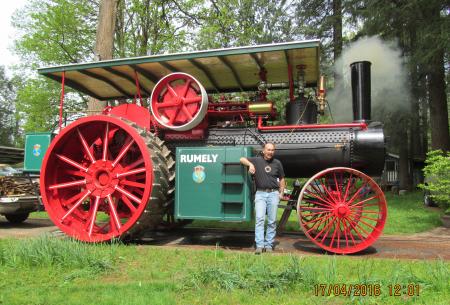 It took George Hoffman 25 years to gather all the parts he needed for his 36-120 Rumely Canadian, literally digging some parts out of the ground. The big steam tractor is one of only two surviving Rumelys built to Alberta's heavy boiler specifications.

"In the first decade of the 1900's, there was more than one boiler explosion a day," says Hoffman. "Alberta specified boilers be built with 1/2-in. steel plate. They also had different axle mountings and different dry bar mountings. I needed Canadian pieces, and they were hard to find."

Hoffman detailed his journey in the October/November 2018 issue of Engineers & Engines. He and the editor have permitted us to share some of the highlights of the journey with FARM SHOW readers (www.eandemagazine.com).

The effort began in 1992 when Hoffman and his son noticed a pair of big steam tractor wheels in the grass in a field in southern Alberta. After locating the owner, he bought the 30-in. wide, 84-in. tall wheels for $300. A fellow steamer fan helped him identify the brand and then locate a boiler and other parts to go with it.

The Canadian Rumelys, with their 36 drawbar horsepower, 120 belt horsepower, and 8-in. bull gears, were initially used to plow up prairie sod. Once it was turned over, smaller, lighter tractors could work it. As a result, the big Rumelys worked themselves out of a job, and most ended up powering sawmills. Eventually they were replaced by more efficient power sources, and most were broken down and abandoned.

Those mill sites became parts depots for Hoffman. At one spot in British Columbia an old Rumely had been picked over by neighbors. Hoffman went door to door and recovered key pieces. Eventually he identified 6 old mill sites where Rumelys had been abandoned. In some cases he found damaged pieces he could repair and in other cases entire components.

At one point, Hoffman hauled an excavator 1,000 miles to a mill site near Prince George, B.C. With the landowner's agreement, Hoffman and several friends and their wives spent a week digging through old sawdust and mud recovering parts.

"The holy grail was a big differential gear complete with spiders," recalls Hoffman.

After going back to southern Alberta where he first found the rear wheels, he located 2 front wheels and a 1,500-lb. extension rim on neighboring farms.

Throughout the recovery process, Hoffman was helped by many fellow steamer fans who came across or heard about parts, buried and otherwise. One friend was at a farm auction where he was able to buy a brand new, never used, bull gear for the tractor for $125.

Hoffman had previously found an engine from a 30 hp. Rumely. After 10 years searching for a 36, he brought the 30 home and discovered it matched up perfectly to the boiler. All that remained to be located were 2 big, differential bearing caps and 2 clutch shoes.

In 2013, the then 76-year old Hoffman began to assemble his steamer. Parts were repaired as needed, sandblasted, primed and painted. Cannon, axle and differential bearings had to be Babbitted, using 120 lbs. of Babbitt. A few pieces, like the 275-gal. tanks and bunkers, had to be fabricated, and the boiler had to be retubed.

By April 2016 the 36-120 Rumely was complete. Family and friends were invited to a barbecue to see it fired up for the first time.

Since then, Hoffman has loaded the Rumely along with his 10-bottom plow and taken it to multiple shows in the U.S. and Canada.