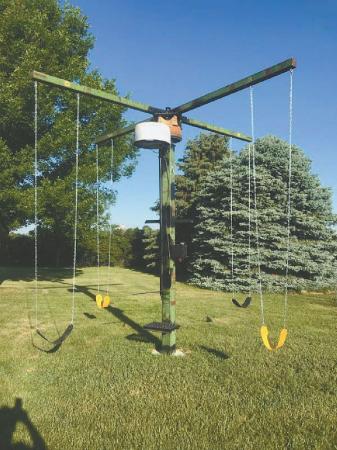 With a few miscellaneous parts and a wheelchair motor, Scott Stetzel built a carnival-type swing for his kids, who are held in place by centrifugal force.
It is solid and stable, Stetzel says, and built out of parts he acquired over time.
"The first thing was the main hub. It's a military trailer axle. That is the heart," he says. "The top cross pieces are (15-ft.) John Deere rotary hoe tool bars."
He was ready to build this spring after he obtained a 7 by 7 Deere cultivator toolbar for the upright. It's secured in a 5-ft. deep hole filled with concrete, with 12 ft. of the toolbar above ground. He mounted the axle onto it along with the wheelchair wheel and motor, covered by the bottom of a barrel that protects it from rain.
A lever near the bottom engages the rubber drive wheel that friction-drives the hub. Another lever adjusts the speed with a brake to slow it down.
"It freewheels very easily; there's no drag on it," Stetzel says. "I can get it going fast by just pushing them."
He purchased heavy-duty swing chain and used seats from an old swing set, spending only about $200 for everything.
"My kids are 9, 10 and 11 and they just have a blast with it," he says, noting they want to go even faster. He may do that by adding a second battery to the wheelchair motor to double the rpm's.
Whatever the speed, there are safety rules such as no jumping off swings, dragging feet, swinging sideways, or hitting the brake for a fast stop.