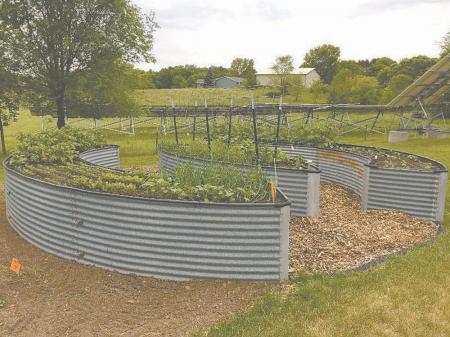 After seeing multiple ideas for creating raised garden beds, David Sand, Avon, Minn., came up with the idea of using grain bin panels to make beautifully curved beds that are easy to access.
The beds are 30 in. tall, which is the width of the panels he used.  He bolted them together in two half circles with a boat-shaped island in between them.  He had to cut down some of the panels to fit the ends.  And he put split black water pipe over the top edge of the panels to cover the sharp edges, holding the pipe in place with zip ties.
"The beds are filled with dirt from my former garden.  I buried water pipes in each bed that come up to the top to irrigate," says Sand.  "This is the first year for these beds so it's going to be interesting to see how they pan out."
He already likes how easy it is to work on the garden and he figures the grain bin panels should last many years before needing replacement.