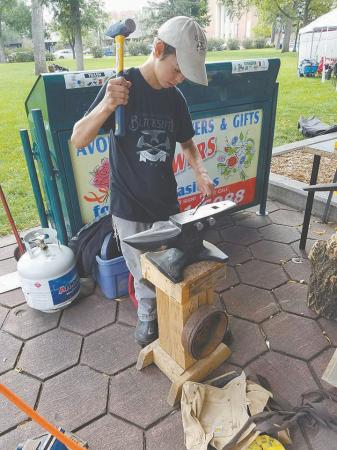 It's 95 degrees and Asher Camire has just finished working several hours on his parents" produce farm. But instead of relaxing in a cool place, the 11-year-old heads to his blacksmith shop to complete orders for his own business, The Echo of the Anvil. He is Colorado's youngest registered blacksmith.
"The heat, the sparks, red metal - I just felt attracted to it," Camire says. When he was 9 1/2 he saw a YouTube video about firepit blacksmithing. Under the watchful eye of his parents, he started working on a sword made out of rebar. He never finished it, but that experience led to taking a class.
"The first thing I made was a nail.  It took me an hour to make it. Now it takes 30 seconds to make one," he says.
With practice, many classes and the encouragement of his instructor, Ron Hardman, Camire passed the test to become a registered and licensed journeyman blacksmith, which included making a pair of blacksmithing tongs. In less than three years, he's gotten stronger, starting with an 8-oz. hammer and now up to swinging a 3-lb. hammer. Typically he uses a 2 or 2 1/2-lb. hammer to make hooks, latches and decorative scrolls and leaves.
"I usually make practical stuff," Camire says, such as S, J and twisted double hooks. The hooks and tools come in handy on the farm, and they sell well at the markets where his parents sell produce.
"Sometimes they let me set up a booth to do demos. My propane forge is small enough that I can bring it with me," he says.
He is learning to use a coal forge in the 15 by 25-ft. metal shed his father lets him use as a blacksmith shop.
Camire likes to use scrap material and coil or leaf springs that he finds around the farm or at auctions. He's working on building a fertilizer sprayer for the farm.