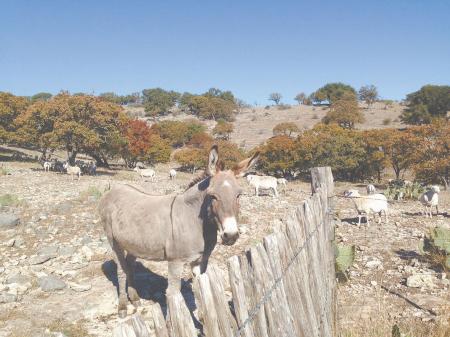 "Best Buy" Guard Donkeys
"After 30 years we would not have sheep and goats if we didn't have guard donkeys," says Joan Bushong, a Texas rancher.  "But they are only a tool, like a guard dog is a tool. They don't eliminate the problem of predators, but they help control it."
Joan and her husband, Perry, raise about 200 Dorper sheep and 300 Black Spanish goats in the rugged canyon country near Mountain Home, Texas. Predators became a big problem in the 80's. The breed the Bushongs use is the Jerusalem donkey, a large breed donkey with a distinct cross on its back.
"Their neck, feet and teeth are strong, and they rear up their feet and legs like a horse. They become bonded to the sheep and goats and will go after predators in defense of their flock," Bushong says.
To develop that bond the Bushongs pen one donkey with a couple dozen sheep or goats for at least two weeks before turning them out to pasture. Donkeys need companionship and become very protective of "their flock".
Over the years the Bushongs have learned to put only one donkey in a pasture, because if there are two they will hang out together and not protect the flock as well. The Bushongs are also careful not to have flocks in neighboring pastures where donkeys can hang out at the fence together.
Another thing they learned the hard way is not to use old Jacks (males). "In the past we have had Jacks, but they get mean like a stud horse, and will kill baby lambs and kid goats," Bushong says. The Bushongs only use females (Jennys) or young castrated male Jerusalem donkeys. Young Jennys adapt the best.
Donkeys are more self-sufficient than guard dogs as they eat with the livestock, and they can't get under the fences and onto the roads where they might be killed by a car.
She stresses that donkeys are just one of the tools they use. Good fencing and predator control by trappers who are paid for by ranchers are just as important.
There continue, to be livestock losses - especially during lambing and kidding and also when they begin to fatten up. It is an ongoing and unending problem and a very expensive problem as well.
Typically donkeys handle coyotes fairly well if the pastures are not too big, Bushong says.
Russian boars are a bigger challenge.
"They can consume eight to 10 babies a night. Boars eat every part of the lamb or kid. They even consume the hooves," Bushong describes. With sharp tusks that cut like a knife, boar attacks are vicious, and she has seen cuts on her donkeys legs.