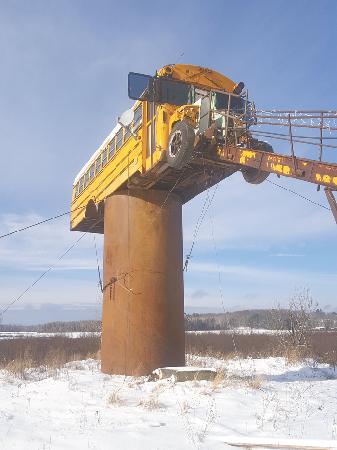 Jesse Kauffman doesnt worry about making noise walking to his deer stand early in the morning. Hes already there, because his stand is a roomy 72-passenger bus welded to the top of a 28-ft. gas tank standing on end in 10 ft. of dirt.

Besides sleeping on an air mattress in the bus stand, the Springbrook, Wis., hunter can make a meal on the stove, relax in one of two recliners, and play cards or games with visitors at the card table. And, most importantly, he stays warm with a camper heater.

Kauffman cant take full credit for the idea. Many years ago, his father, Willie Kauffman, mounted a small camper on the gas tank for a deer stand. It worked for several years but fell victim to a severe windstorm that also blew their barn down.

So I decided to upgrade. A neighbor had a bus, which is much better than the camper because it has more windows to shoot out of, Kauffman explains.

He stripped out the bus seats and engine and prepped the bus for elevating. As owner and operator of an excavating business, he had the means to lift the bus on top of the tank, though the first attempt failed. The dirt platform he built and the bulldozer he used werent big enough and the bus crashed to the ground. With a second bus, a day and a half building a dirt ramp and a bigger dozer, he was able to safely push the bus atop the tank. Welded to the frame and anchored on all four corners to I-beams buried in the ground, it has stood strong against winds since 2010.

An old bale elevator provides a stairway to enter the bus through the engine compartment.

We just made do with what we had using scrap iron from the farm, Kauffman says.

With so many windows, visibility is good all the way around, and several hunters can be in the bus stand at the same time. Its also great for coyote hunting and spending time with his daughters, Kauffman says.

The best part is being able to wake up in the deer stand, Kauffman concludes.