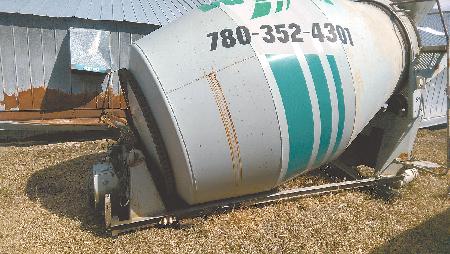 Marty Winchell uses an old concrete mixer to compost dead animals on his mixed livestock farm in Alberta. The concrete mixer makes a great composter for several reasons but one of the most important is that the steel exterior and raised opening keeps wolves, coyotes, bears and cougars out.

"We used to compost dead animals in windrows, but that attracted predators," notes Winchell.

He raises cattle, sheep, pigs and chickens, selling the eggs and meat locally. There is no market for spent laying hens so they are killed. Normally, he would have to pay a rendering truck to haul them away, as with other livestock that die naturally.
He wasn't the only one with the problem, so Bear Smart, an Alberta provincial program, gave him a $2,000 grant to try his idea.
"With the grant, I bought a cement mixer with a bad hydraulic drive and no truck," he says. "It cost me $1,000 to transport it here and around $800 for a new hydraulic drive, plus I had to buy some hoses. I figure I've got about $2,000 of my own money in it."
What he got for the money was a simple and more than adequate composter. The entrance to the mixing barrel is easy to load with any carcass the size of a large ewe or smaller. Winchell simply adds sawdust or straw and connects the hydraulic drive to his tractor or skid steer hydraulics.
"I spin it a few times and then turn it again in a few weeks," he says. "If I have time, I'll hook it up and spin it occasionally."
Winchell knows if he ran it more often and watched temperature and moisture more carefully, material would compost more quickly. As it is, it requires very little attention and gets the job done.
"If it looks too dry, I add water, or if it starts to smell a bit, I add straw or sawdust," he says. "As long as it is heating, I assume it is working. When it is ready, I just spin it the other direction, and the compost empties out."
Winchell suggests a similar rig would be ideal for a broiler operation where mortality tends to mount toward the end of the growth cycle. "You could put them in and spin them, and by the time the next flock was maturing, the compost would be finished."
One thing he likes is that he has had no complaints from neighbors.
"I'm surrounded by acreages on 3 sides and the river on the fourth," he says. "You have to be a good neighbor. This helps."
He thinks the idea will work for any livestock producer. "If you check around, you'll find a mixer on its truck for around $2,000. Instead of paying to transport the mixer home, you can drive it and then sell the truck."