ATV Loader, Implements Back In Production 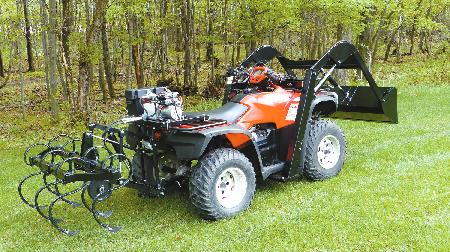 In 2004, I bought a Groundhog loader for my 500 cc Honda Foreman 4-wheeler. It came with a bucket, blade and posthole auger. I use it at my wooded homesite and on my farm.

The Groundhog was originally manufactured by Smucker Mfg. and later marketed by Concord Equipment.

A few years ago Concord Equipment stopped selling the loader so I was worried about getting replacement parts. When I recently heard that Wild Hare Mfg. had reintroduced it as the Wild Hare Implement System, I called the company and found out the redesigned loader now has more power and attachments with a more dependable power source.
"We boosted the hydraulic system by 30 percent," says Bob Aldrich, Wild Hare Mfg. "We also switched the power source to a category 24 deep cycle battery. The original system used the ATV battery, and the power drain was too much."
The hydraulic pump, with its new deep cycle battery box, has been moved from the front rack to the rear. Loader mounts have stayed the same. While the front rack carries some pressure, most of the lift weight is transferred to the foot rest/floor board leg mounts.
The heavy-duty, 44-in. wide bucket is the heart of the system and remains unchanged. I've used mine extensively for dirt, gravel, logs and snow. The 5-ft. lift height and 300-lb. lift and download pressure capacity are the same. What has changed is reaction time with the larger hydraulic pump. The increased power means an operator can lift his ATV off the ground when using both front loader and rear hydraulic attachments.
Wild Hare also extended the snowblade length from 48 to 57 in. I have used my old blade extensively over the past 10 years for everything from back blading the driveway to terracing a hillside garden. The 4-way action lets me lift, lower and tilt the blade hydraulically. Swinging the blade left or right is manual, but easy.
Keeping our 450-ft. driveway clear of snow is fun and fast. However, because the wheel track matches the blade width, the snow banks can pile up. That wider blade would be nice.
Other accessories carried on or added by Wild Hare include pallet forks for the loader, rear 3-pt. hitch, 48-in. cultivator, and 57-in. disc harrow.
"We will be adding a new and larger post hole auger this spring, as well as a box scraper," says Aldrich.
Wild Hare recommends a minimum ATV size of 400 cc. It's designed to fit most major brands. Safety recommendations include keeping speeds at 5 mph or less. While the front suspension doesn't carry the entire load, suspension locks are provided and are highly recommended.
I once had to replace my front shocks after improperly installing the locks. Currently I?m trying a set of multi-stage Progressive shocks. They were half the price of Honda OEM shocks and are significantly heavier duty. If needed, I'll reinstall (correctly this time) the suspension locks.