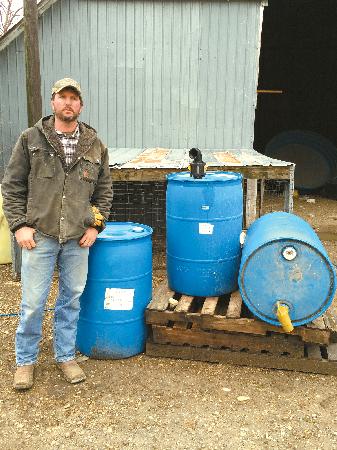 After years of seeing the benefits of feeding raw apple cider vinegar to his livestock, Brian Buessing decided to get into the business of offering it to others in bulk. Unlike processed vinegar, the raw form still has the acetic acid bacteria or Acetobacter that help transform apple cider and wine into vinegar. According to Buessing, the snotty looking material suspended in the vinegar is referred to as "the mother."

"The mother stays alive in the raw vinegar until it's pasteurized and filtered," he explains.

Buessing and other long-time users of vinegar as a supplement suggest that it's the presence of the mother that produces the most benefits. He cites customers who claim improvements in overall health and productivity.
"One Pennsylvania dairyman told me he's getting the same milk production with 20 percent less feed," says Buessing. Buessing says he has been feeding raw vinegar in his diversified livestock operation for about 5 years. "The most obvious change is shinier hair coats and bright eyes," he says. "I also don't have problems with foot rot or pink eye any more. My pigs reach market 10 days to 2 weeks earlier and on less feed."
Usage recommendations vary. The raw vinegar can be provided to animals free choice in water or in feed. Buessing suggests users find what works best for their operation. He does offer in-depth recommendations on his website. General recommendations for sheep and cattle are 4 to 6 oz. per 1,000 lbs., but 150-lb. calves receiving it in water may get 3 oz. a day. He suggests giving pigs and chickens 3 to 4 gal. of vinegar per ton of feed.
"I think it was better known how to use it in our grandparents day," he says. "It is almost like we are rediscovering how to use it."
Buessing bought his raw vinegar distribution business from his former supplier, a fellow grazer. He now ships raw vinegar across the country. Acetobacter occur naturally in the air, and anyone can make raw vinegar. However, the process is slow.
"Our supplier adds Acetobacter to apple cider to speed the process and reduce the cost," explains Buessing.
Keeping costs down, especially shipping costs, is the biggest challenge Buessing faces. He now has warehouses set up in several states around the country that make shipping more economical. However, costs can still vary locally depending on available shippers. While he can ship to Canada, shipping costs may discourage potential customers. Buessing is hoping to add more dealers and warehouses to his network.