"Made It Myself" Cob Meal Harvester 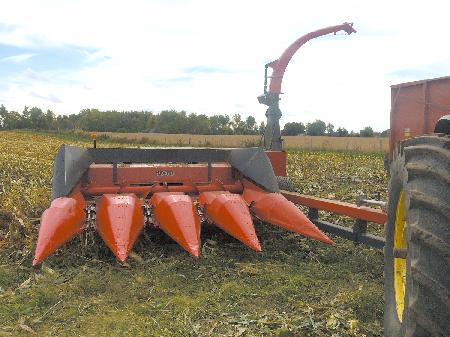 Marvin Bearinger's cob meal harvester looks fresh off the showroom floor, but it was built from scratch. Most components came from a local salvage yard, and a local machinery dealer helped him put it all together.
"I had a regular chopper with a 4-row header that was nothing but trouble," says Bearinger, a custom harvester. "I discussed modifying it with Riverside Equipment, my local dealer. They suggested starting from scratch and keeping the old one as back-up."

Bearinger went to work, using his imagination and a plentiful supply of parts from a friend who owned a local salvage yard, B&M Agri Parts. Components included a cutterhead off a Deere 3960 chopper, a Case IH 1043 cornhead and a feederhouse off a Case IH 1440 combine. The pto shaft, tongue pole assembly, and impeller came from a Dion forage harvester. A clutch for engaging the pto was adapted from a rear-end pto assembly on an IH 656 tractor.

"I laid them out to see how they could fit together and then welded a frame that would fit beneath them," says Bearinger. "Whenever I thought of something I needed, I would ask my friend at B&M if he had it. If he didn't, he would tell me what he had, and we would truck it down and try it."
The cutterhead is the most important component. Bearinger placed it at the end of the pto shaft gearbox and clutch (rear-end pto assembly). The pto assembly came complete with its own oil reservoir. Bearinger ran the pto power in one side and a pto drive for the cutterhead and feeding auger out the other side.
"I replaced the original engaging control lever with an electric solenoid so I could operate it from the tractor," says Bearinger.
The feeding auger is a heavy-duty, 18-in. dia. auger with 1/2-in. flighting. Crop enters from the cornhead through the feeder housing to the feeding auger. The auger pushes it endways into the cutterhead.
Behind the cutterhead, a concave style screen with 1/4 by 3/4-in. upright bars catches any long leaf material and returns it to the cutterhead. Properly sized material feeds through the screen to the processor, which rolls kernels and cob, crushing them fine. Material then moves to the impeller and up the spout to the wagon.
"I needed a reverser on the feederhouse in case of a jam," notes Bearinger. "I used an orbit motor with overriding clutch from a Gleaner combine. It hooks on back of the feederhouse shaft, opposite where the drive enters. Once I shut the header off, it can reverse both the feederhouse and the auger."
Initially Bearinger mounted the harvester frame on wheels and an axle from a Deere 6601 pull-type combine. The left wheel was mounted in front of the impeller to avoid making the 16-ft. wide harvester even wider. This caused the harvester to balance on the wheels. To get the proper weight on the tongue, Bearinger replaced the right wheel with a long oscillating tandem axle under the impeller blower.
Everything that can be hydraulic is. "I use electric over hydraulic controls," says Bearinger. "They control vertical movement of the header, turning the spout and the selector on the spout, swinging the pole from field to transport and engaging and disengaging the header and cutterhead."
Bearinger estimates he has spent just under $50,000 on the harvester, including about $3,000 on paint. He is confident of a good return on investment after its second year in the field.
"I started putting it together in June of 2014 and had it in the field by September," he says. "We did around 400 acres last year and about 380 this year with a lot of happy customers."
Bearinger is happy too. His cob meal harvester does a better job than his forage harvester did for the same job. "Forage harvesters are designed for corn silage, not cob meal," he says. "I've had nothing but trouble with them. This harvester can do 40 acres a day with far fewer mechanical problems."