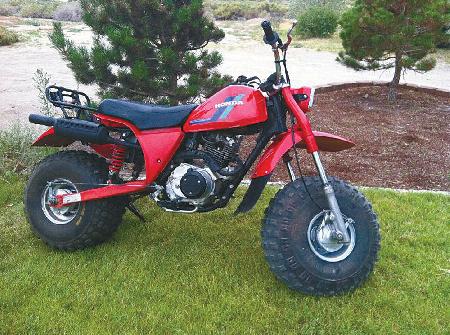 Brent Seline of Fallon, Nevada recently sent FARM SHOW photos of an old Honda Big Red 3-wheeler he turned into a fat-tire dirt bike.
"After seeing a couple of other 3-wheeler to 2-wheeler conversions, I took what I considered to be the best approach and turned a couple of 1980's Honda Big Reds into a nice running, fat-tire bike," says Seline. "I purchased the two "basket case" 3-wheelers for a couple hundred dollars and figured a dirt bike conversion would be the best use for them. The bike handles great and is easy and fun to ride in the soft sand around our desert area."
He stripped one of the 3-wheelers, an ATC 200E, down to the frame and removed the engine, then fabricated a swing arm mount. After removing the 3-wheeler's rear axle and mount from the frame, he installed the swing arm and twin shocks from a 1987 Yamaha BW200 dirt bike. The swing arm incorporates a jackshaft to keep the chain clear of the bike's wide rear tire. He also mounted a no. 520 sprocket inside the jackshaft that matches a sprocket already on the Honda engine.
The bike?s front forks and triple tree came off the other Big Red, a narrower ATC 200S. Seline lengthened the forks several inches to get a proper stance and better handling. He kept the 3-wheeler's stock muffler and exhaust after lengthening the pipe and re-fitting it. He also installed a new carburetor and several smaller components to complete the build.
"The bike still has the 3-wheeler's original Hi-Low transmission and electric start. I repainted the gas tank and recovered the seat," notes Seline.
Contact: FARM SHOW Followup, Brent Seline, 773 Curry Rd., Fallon, Nevada 89406 (ph 775 423-7589; brent@cccomm.net).