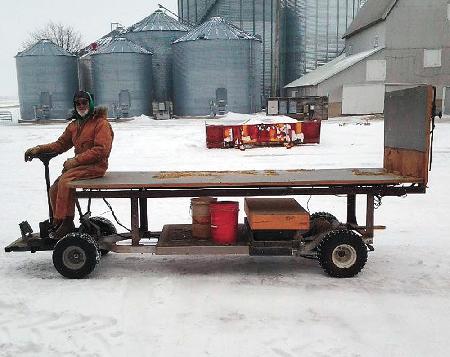 Paul Butler wanted a machine to move big square bales from his hoop buildings into his feedlot without making a lot of noise and fumes. So the Malta, Ill., organic farmer converted a Club Car 6-passenger, electric-drive golf cart into a one-of-a-kind "big bale cart" that handles bales weighing up to 800 lbs. effortlessly.
"For years we had been making small square bales and elevating them into the hay mow where young people stacked them, but we couldn't always find help. So we switched to big square bales," says Butler. "However, the big squares presented a problem. We had already invested in a used telehandler for stacking the bales in the hoop buildings, plus grabs mounted on front of loader tractors to pick up bales in the field and place them on racks, but we needed a new system for feeding the bales."
They started with an unmotorized wagon they could pull with a mower or ATV, both of which were too noisy for use in the barn. They ultimately came up with the idea of a self-propelled cart powered by an electric motor. And the best way to start, they decided, was to buy a large golf cart.
The finished bale cart measures 11 ft. 2 in. long and 4 ft. wide and is powered by the golf cart's electric motor and rear-wheel-drive system. A deck made from 2 sheets of 1 3/8-in. thick plywood sits on a 2-in. angle iron frame that supports a vertical wall at the back end. The operator sits on front of the deck and uses the golf cart's repositioned steering wheel and foot pedal controls. The cart's original floorboard, located 2 1/2 ft. below the deck, is used to store the battery and hold 5-gal. buckets of corn and oats.
Butler uses a skid loader to load the bales onto the cart and then drives into his sheep feedlot and places the hay into feed bunks, then scatters shelled corn and/or oats on top of the hay.
The deck sits about 3 ft. off the ground. A Digistar electronic weigh scale mounted on back of the cart shows the bale's weight and also lets Butler know when the right amount of hay has been fed. The scale can be quickly moved out of the way when not needed.
"The scale is clamped to a metal tube that fits inside another tube fastened to the back wall, and is located high enough so the operator can see it above the bale. Whenever the scale isn't needed, we can turn a valve to let the scale down so that it's protected behind the wall," says Butler.
He reworked the front part of the golf cart's frame to reposition the steering wheel vertically and moved the foot pedal controls farther forward. He left the battery in back, enclosing it in a wooden box that sits on the golf cart's original frame underneath the deck. The box keeps dust off the battery.
Butler says he used as many original parts from the golf cart as he could. "We removed all the plastic shrouding but kept the lower frame and beefed up the axles. We also welded in new material to lengthen the frame by 18 in.," he says. "The bale cart still has the golf cart's original controls and operates just like the golf cart did, including activating the cart's "beep beep beep" safety alarm as it backs up."
He also strengthened the rig's suspension by mounting larger springs over the golf cart's original springs. "The deck is supported by angle iron to keep it from sagging under the weight of the bale," says Butler.
"We use it all year long for a variety of jobs. It's really handy," says Butler, who credits his helper Richard Donnelly for most of the planning work. "We use it to feed bales to sheep and to horses that we board on our farm, and also to weigh big plastic tote bags of organically grown seed that we sell locally. The electric motor has a lot more torque than a gas motor so it has no trouble handling an 800-lb. bale. A big bale provides a lot of traction, so it'll go through deeper snow than you'd expect."
He says he runs the cart about a half hour each day and has to recharge the battery only about once a week.
"We paid $5,600 for the golf cart. We already had the weigh scale and the plywood, which Donnelly's brother got from a local warehouse," notes Butler.
Contact: FARM SHOW Followup, Paul J. Butler, 5430 South Malta Rd., Malta, Ill. 60150 (ph 815 761-4792; fbutler203@gmail.com).