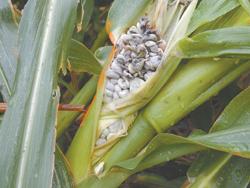 Veronica Guzman's research focuses on growing corn smut - on purpose. That goes against the sensibilities of conventional crop producers, but Guzman isn't working for big farmers.

The Aztecs were the first people known to eat corn smut, which is called huitlacoche (pronounced WEET-LA-KO-CHEE), and it is considered a delicacy in Mexico City and other regions of Mexico. The fungus has a mild, earthy flavor and is used in a variety of recipes. Nutritionally, it's packed with unique proteins and minerals, and loaded with lysine, an essential amino acid. It has more cholesterol fighting beta-glucens than oatmeal.

"Huitlacoche sells for $20-$30/lb., and around Chicago it's successfully marketed to restaurants," Guzman says. "We are at the border of Mexico and have a large Hispanic population so people are more likely to know what it is."

The former USDA lab technician works as a program coordinator for the University of Texas-Pan American in Edinburg, Texas, and acquired a Southern Sustainable Agriculture Research and Education (SSARE) grant for her research.

The fungus that grows into smut is common in most soils and typically occurs randomly when weather conditions are hot and dry or cool and wet during pollination. Getting it to grow consistently is more challenging. Guzman collected galls of corn smut and dried the powder and purchased frozen smut to inoculate with a syringe, one ear at a time during pollination. Neither method produced reliable results.

The only method that worked (60 percent success rate) was using a pure culture strain of the fungus, which she grows in a broth media. Guzman's challenge is to develop a method that makes it easy for a farmer to access and apply the spores to inoculate their sweet corn or field corn. Biological supply companies could provide spores, and Guzman believes that farmers could use backpack sprayers or automatic syringes to inoculate corn.

The other challenge is harvest.

"There's just a one or two-day window to harvest it," she explains. About 16 to 24 days after inoculation, the Huitlacoche is moist, spongy and ready for harvest. It doesn't take long for it to become mushy and inedible.

The fresh Huitlacoche must be put on ice and shipped overnight, sold right away, or frozen.

Guzman notes that smut shouldn't be a problem for neighboring fields of corn, because each ear needs to be inoculated by hand, and farmers who grow corn for the smut will harvest it before the spores dry up.

With recent publicity, she's had calls from chefs, so she knows there is a market. With two more trials and workshops and events with farmers, she is hopeful that huitlacoche becomes a viable crop for local producers with small acreages.

"We're going to do demonstrations with local growers to get the technique down so they can do it (inoculation) themselves,? she says.

More information about her research can be found at www.southernsare.org.