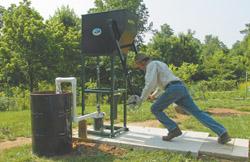 Darren Hollidays WaterBuck Pump lets him pump water from an 80-ft. well by hand. Holliday wanted a pump that would work off grid to supply his home and garden water needs. What he came up with does that and a whole lot more.

Deep well hand pumps are not practical, except for emergencies, because of the effort required, says Holliday. I wanted something my wife or I could both pump to get a lot of water, not just now, but when we are in our 70s and 80s.

Holliday designed the WaterBuck for his own use, but is now selling it. The 76-in. tall, two-handed pump uses its mechanical advantage to let him pull big volumes of water from 80 ft. and deeper.

The WaterBuck has a 4-ft. wide handle to accommodate two people, and the handle can be extended from 4 to 5 ft. for greater leverage. Holliday recommends it be used with windmill-style reciprocating pump cylinders of up to 6 in. in diameter. He suggests using 3/4-in. fiberglass sucker rod to handle the high torque produced by the WaterBuck.

The current WaterBuck has a 16-in. stroke. Holliday plans to go to 18-in. on the next generation. He suggests the machine could handle a 26 or 28-in. stroke, though it might require two people to do the pumping at greater depths.

The pumping rate and depth that water can be pulled from depends largely on the size of the cylinder as well as the stroke.

If you used a 2-in. cylinder in a well with a static water level of 300 to 500 ft., you could still produce 3 gpm with the WaterBuck, says Holliday. With a shallow well, an 8-in. casing and a 6-in. cylinder, a WaterBuck could produce more than 30 gpm.

Volume produced also is a matter of the strength of the person pumping. Holliday has run trials using his WaterBuck with a 4-in. brass pump cylinder, a static water level of 80 ft., a 2-in. drop pipe, and a 3/8-in. metal pipe sucker rod.

Holliday compares his output to a standard hand pump. He estimates it would require a strong, fit man stroking a traditional hand pump 60 times a minute to get 3 gal. of water from a 3-in. cylinder with a static water level of 80 ft.

While Holliday intends to use his WaterBuck off grid, he suggests it also offers dependable back-up to powered pumping systems.

If you put in at least a 6-in. casing when drilling a well, there is room for a 3-in. well cylinder in addition to a submersible pump, he says.

Holliday says the WaterBuck can be used with a standard pressure tank. It will force water into the tank, building up water pressure to around 50 psi to supply home needs.

The current generation WaterBuck when sized for a static water level of 80 ft. would be considered high compared to a hand pump, but its less than a comparable solar system or even a 10-ft. windmill, includes a brass reciprocating pump cylinder, brass stuffing box, cylinder strainer, fiberglass sucker rods, sinker bar and concrete anchors.

Gym weights can be added, if needed for leverage, to each side of the handle bar of the pump. A built-in counterweight offsets the weight of the sucker rod in the cylinder.

Holliday says a new generation WaterBuck will have a cam added off the shaft on both upper ends of the pump lever. Similar to cams found on pumps over oil wells, they will increase efficiency for greater output and less effort.

The counterweight for the sucker rod may not be needed with water levels less than 100 ft. deep, but with it I think we will be able to pump water at levels of 600 to 700 ft., says Holliday.

See the WaterBuck in action at www.farmshow.com.