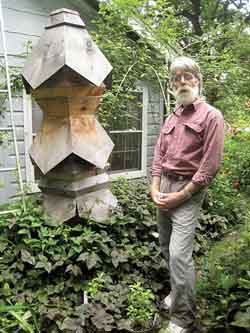 Breland lost all his bees in 1996, so he went looking for the cause of bee swarm losses. He says two factors were subjecting bees to unnatural conditions: widespread use of the conventional, square-cornered Langstroth bee hive and the stresses involved in transferring commercial hives to different areas, as well as feeding bees high fructose corn syrup.

He says his dodecahedron design is the kind of hive that bees would build if they could use power tools. It's a 5-sided hive built strictly for bee comfort and not for honey production. Beekeepers around the U.S. have been testing his hives and harvesting honey from them.

Breland says bees shouldn't be forced into cramming honeycombs into unnaturally square shapes, as with conventional beehive designs. His hives allow honeycombs with naturally rounded edges. The unusually shaped hives also allow bees to gather and move around in the hive in a more natural manner.

To view videos of Breland explaining the benefits of his hives, search up his name at YouTube.com.