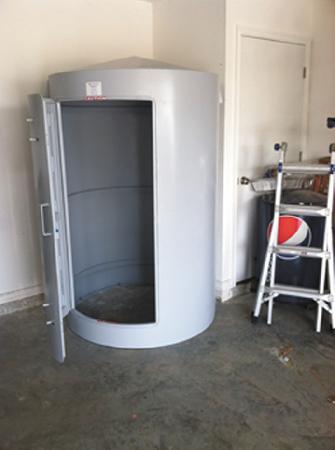 Built for strength, price and to save your life  thats the purpose of the above ground storm shelter made by Mid America Shelters.

Being round, its stronger and dissipates 40 percent of the wind. Plus, we can build it for less cost, says Don Bundy, who partnered with Ken Lord to develop and manufacture the shelter.

Currently they sell it around their area in Sapulpa, Okla., for $1,800, plus $300 for installation. But with the positive response theyve been getting, they plan to establish dealers in other parts of the country.

People are surprised by the room in the 48-in. dia. shelter. It can hold up to 6 adults standing or a couple of people on folding chairs and two people standing.

The partners have years of experience manufacturing metal, and they kept the design simple  a 3/16-in. steel shell with ribs and a cone-shaped roof. It weighs 700 lbs. and is designed to be anchored to a concrete garage floor with wedge anchor bolts.

It meets FEMA and ICC-500 standards, withstanding a 15-lb. projectile at 100 mph, comparable to a 250 mph ground speed tornado.
Also, we have the best latching system (inside and outside) according to Texas Tech, Bundy says. Its a double gravity lock slide system. Nothing can knock it open.

Being round and above ground has several advantages, Bundy says. Many people, especially older people, dont like to go into underground shelters. By placing it in a garage, its easily accessible. If its buried in debris from a tornado, people inside can bang on the metal to be heard by rescuers  or use a cell phone. There are two small, covered vents and air coming in from around the door to provide adequate ventilation.
Bundy says firefighters at a trade show remarked that it was the best design they had seen.