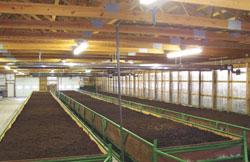 Tom Herlihys 50 million head of livestock produce a high value product and solve a huge problem for a neighboring dairy operation. The Avon, N.Y., entrepreneur has one of the longest worm composting operations in the country.

Three full-time and one part-time workers care for the millions of red wrigglers in 21 160-ft. long compost beds inside nearly 100,000 sq. ft. of buildings. Tractors load in separated manure solids from a neighboring dairy farm. Mixers and conveyors help automate the process, which consumes about 10 million lbs. of manure annually.
Herlihys facility allows the neighboring dairy farmer to dispose of about half of the manure from the 1,000-cow herd. Though the dairy isnt organic, the composting process creates an organic fertilizer.
Air blows through the composting manure, which generates temperatures up to 170 degrees to kill disease organisms, deactivate weed seeds and enrich food value for the earthworms. The compost is fed to worms in the digester beds. They excrete castings, which drop to the bottom and are removed after 40 days.

We are trying to make a Cadillac product that is consistent, uniform and repeatable, Herlihy says. We want to ensure our end product is the best it can be and the same every time.

A 1,000-lb. bag of Worm Powers vermicompost can sell for as much as $400, but most is sold at bulk rates to blenders who create potting mixes for greenhouses. Vineyard and turf farms also use the organic fertilizer. About 10 percent of Worm Power vermicompost is packaged for home gardeners.

Herlihy, an experienced engineer, has spent nine years fine-tuning the process at the Worm Power facility.
Theres a lot of science behind what we are doing, he says. Its not just a good idea anymore. We are linking animal agriculture with plant agriculture, and creating a new agricultural business.

While Worm Power is the largest agricultural vermicomposting operation in the western hemisphere, Herlihy emphasizes that it can be sustainable on many scales. He expects his operation to continue to grow, but notes that dairy farmers with 100 cows can run a profitable side business by windrowing manure and adding worms.

Marketing, educating and figuring out optimum timing and application rates are Herlihys current challenges, in addition to his work as an organic waste management consultant.

Part of the marketing includes developing new products, such as bulk liquid fertilizer for hydroponics operations and drip lines in high tunnels. For retail consumers, Worm Power sells brew bags to slip into a watering can. Products can be purchased through the Worm Power website.