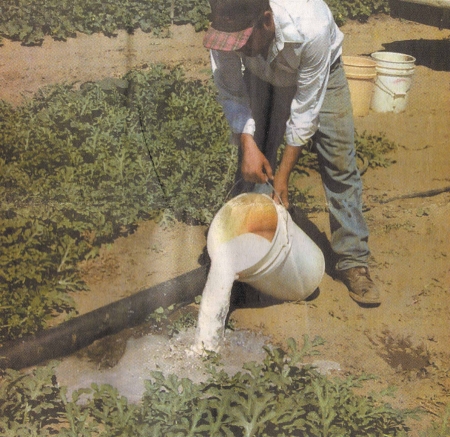 A Washington orchard grower is using milk to enhance the flavor of fruits and vegetables.

John Chen grows a mixture of Asian vegetables and fruit on 90 acres near Moses Lake, Wash. Milk, which he buys from a local dairy, is poured onto the roots of crops as they near maturity. Workers pour 5-gal. plastic buckets of milk several times a day -- 50 to 100 gal. worth -- on the roots of cherries, apples, melons, cantaloupe, and Chinese vegetables.

"The milk boosts the natural flavor of the harvested crop," says Chen.
He applies milk to crops about three times a week, using about 100 gal. per day.

He started his milk "watering" method four years ago after participating in Washington state trade missions to Asia, looking for health-smart foods. He learned that some farmers in his native country of Taiwan use expired milk to water or fertilize their crops, such as guava and papaya, in later stages of plant development.

In Asia, outdated milk is used, but expired milk isn't readily available for bulk sale in his area so he gets fresh milk from a local dairy.

Food produced without chemicals is healthier, says Chen. "We don't put chemicals on anything."

He admits the concoction does have a distinct odor, but he doesn't mind. "Some people say that fruit 'watered' with milk even tastes a bit like milk," notes Chen.