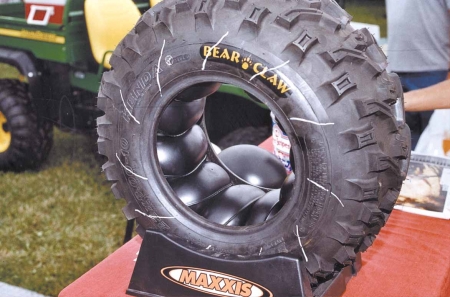 It took a minute or two for most people to figure out how the idea works and then they would often say, "Why didn't I think of that?".

The Tire Ball Development Co. of Crestwood, Ky., says that in addition to flat-proofing, Tire Balls also improve traction and smooth out the ride. Multiple rubber "air balls" inflate to 4 to 30 lbs. of pressure, depending on vehicle application, and are squeezed tight inside the tire. Each air ball has its own valve. The balls are made from material said to be 10 times more puncture-resistant than conventional heavy duty neoprene tubes, so they aren't likely to get punctured. But if a ball does get punctured and deflate, the other balls will reorientate themselves and fill in the void.

According to the company, a sidewall cut or tread puncture has no effect on a Tire Ball-inflated tire. And after a tire's tread wears out, you can reuse the balls in another tire.

The company sells a specially designed inflator and lubricant that are needed to install the balls.

The system was invented about six years ago for use on off road motorcycles by Wade Summers, a champion motorcycle racer. His son Scott, also a champion motorcycle racer, had problems with flat tires. To solve the problem Wade decided to replace the inner tubes in Scott's tires with tennis balls. It worked but they didn't last so he began developing tire balls for motorcycles and ATV's. Different-sized balls are used depending on tire size, so there are 30 to 40 balls in a motorcycle tire and 12 to 14 in a Deere Gator tire. The company plans to soon offer Tire Balls for skid steer loaders, manure spreaders, sprayers, and other farm equipment with a high tire mortality.

Reduced downtime is the big benefit for farmers, says manufacturer's representative Curt Boone. "When you puncture a Tire Ball-inflated tire you just get a flat air ball. Chances are that if just one ball fails you won't even notice the difference so you can keep working. You'll have to lose two or three air balls before you may notice that the tire will sag a little. The big advantage is that at the end of the day you can repair the tire at your convenience. There are alternative patch-type products on the market, such as plugs and liquid sealants, but sometimes they don't work, and with liquid sealants you end up with a mess."

Tire balls aren't cheap. However, Boone says their advantages are worth the extra cost, "We think Tire Balls have a lot of potential in agriculture. For example, farmers tell us that today's bio-engineered corn hybrids have tougher stalks that can puncture tires much more easily than in the past. Corn stalks may puncture the tire's tread, but they probably won't puncture the air balls," says Boone.

"Some farmers have told us they could even see putting tire balls in old tires that have gashes in their sides but still have good tread. Tire Balls would let them reuse such tires until the tread is gone."

Installation can be done by either do-it-yourselfers or dealers. The company's inflator tool is used to fill and adjust the pressure in each Tire Ball. Its tire bead lubricant is applied to the tire bead during installation. A small brush is used to spread lubricant evenly over the entire inside surface of the tire. Then you lubricate each of the tire balls by squirting a few drops on the ball and then spreading the lubricant over the surface by rolling and smoothing the lubricant, using gloved hands. The goal is that every ball ends up filled to the same volume and pressure.