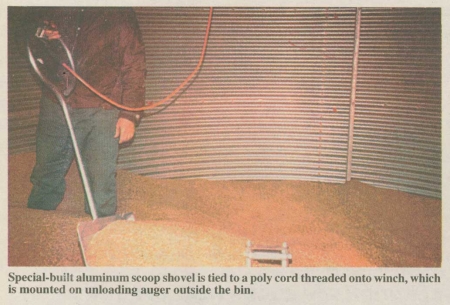 Cleaning out bins is no longer a back-breaking chore for Saskatchewan farmer H.G. Bruce, who invented what he calls a "grain bin drag line" to do the job of a sweep auger inside bins.

It consists of a winch mounted on the unloading auger outside his bin and a special-built aluminum scoop shovel tied to the poly cord threaded onto the winch. A remote control switch on the handle of the scoop shovel lets him turn the winch on or off as needed when cleaning out grain.

An electric cord running from the winch is held up in the air inside the bin by a fiberglass rod that's clipped to the top of the bin door. The rod holds the cord up out of the way over whoever's using the powered scoop.

"When the switch on the scoop is held closed, the winch is activated. Whenever you take your hand away, the winch stops and you can pull the scoop back easily since the winch turns freely when the power's off. There's no bending over. The only work is lifting the shovel to pull it back," says Bruce, noting that one of the benefits of the system is that it's almost totally dust-free, as compared to conventional sweep augers.

He has two scoops. One is 24 in. wide and and the other 36 in. wide with small wheels on it. If there's a plastic vapor barrier on the floor of the bin, the wheels keep the shovel up off the plastic.

In 4 years of use, Bruce says the only repair has been to replace the poly line occasionally. He has made up several units for sale but would like to find a manufacturer.