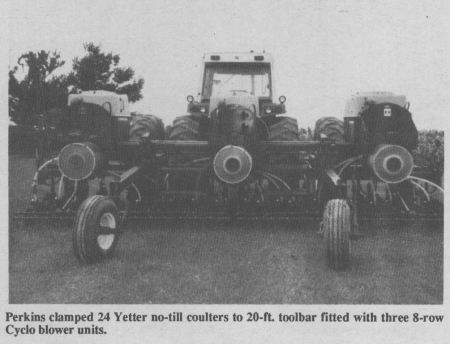 "It lets me seed beans in 10-in. rows without spending money for a new no-till drill," says James Perkins, Kempton, Ill., who mounted three International 400 Cyclo planter units on a 20-ft. planter toolbar to make his own no-till "drill".

Perkins bought three used IH 400 8-row planters and a used IH 500 Cyclo 12-row planter. He stripped the 12-row planter down to the frame and then cut 4 ft. off each end of the toolbar to make it 20 ft. long. He then mounted the seed drums, hoppers, and blowers from the three 8-row planters on the 20-ft. toolbar. An orbit motor, powered by a pto-operated hydraulic pump, drives each blower, and a ground driven wheel, taken off the 12-row planter, controls seed metering. He clamped 24 new Yetter no-till coulters, designed specially for soybeans, onto a 4-in. sq. steel bar that he mounted behind the toolbar. The coulters are spaced on 10-in. centers.

"I tried it on 900 acres of untouched corn stalks last spring and it worked great," says Perkins. "When I first decided to switch to solid seeded no-till beans, I rented two different makes of drills pulled behind coulter carts. However, I wasn't happy with the seed placement of either unit. My air planter no-till drill spaces seeds much better than a drill and the cast iron seed openers are equipped with depth bands so seeds never go more than 1 1/2 in. deep. I really get a good stand. There are press wheels behind the seed openers, and I also mounted a 2-bar spring harrow behind the openers to level out the field and cover tracks. I monitor two rows on each hopper so I always know if there's a problem.

Perkins shortened the original 12-row planter markers and remounted them on the toolbar.