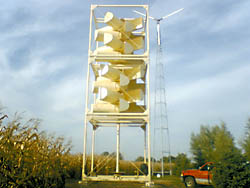 "I've tested this in over 150 mph winds, with no vibrations, no noise, no damage," Fuller says.

The Racine, Wis., inventor has personally invested to disprove the wind power industry's claims that vertical windmills are ineffective.

Fuller's patent-pending design stacks boxes of four structural steel wind scoops on top of each other. The pinwheel-like design has multiple points of impact for the wind to hit, so that any slight breeze turns the blades. His prototype is 12 ft. in diameter and three boxes tall, including a generator housing area at the bottom. He plans to stack nine 12-ft. dia. boxes over generators on 120-ft. towers.

"Nobody's ever made an ultra-large scale vertical design," Fuller says. "Increasing the diameter exponentially increases the output," he says. He recorded almost three times as much energy produced when he doubled the diameter of early prototypes from 4 ft. to 8 ft.

"My goal is to create a generic windmill that a number of manufacturers can build," Fuller says.

Owning a single windmill may also be a good option for large farm operations or businesses with large electric bills.

Fuller added that another benefit of his design is that no birds are killed because they can see the windmill.

Fuller has recorded data and information for people interested in his windmill design.