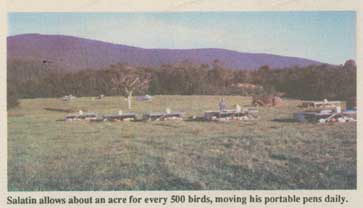 "We've been doing this on a commercial scale for 10 years and I actually started developing the idea as a teenager about 20 years ago," says Joel Salatin, an innovative poultry producer who's come up with what may be the first viable system for safely and efficiently raising chickens and turkeys on open range.

There's been so much interest in Salatin's system that he has started hosting field days for as many as 200 to 300 people at a time who travel to his farm in Virginia from all over the country to learn his methods. Most simply hear about the idea through word of mouth.

"The biggest problem with raising birds outside are predators and the weather. Our portable pens solve both problems so that our mortality rate is actually lower than confinement broilers since the birds are in a much healthier environment," says Salatin. "And the taste and performance of the birds is light years ahead of commercial confinement operations. We use no antibiotics, hormones, synthetic vitamins, and so on. The availability of grass and the fresh air and sunshine allows us to produce these broilers on 30 percent less feed than confinement birds and we have market-ready birds that dress out at 4 lbs. in 8 weeks."

Birds are housed on pasture in mobile 10 by 12-ft. wood frame pens that stand about 2 ft. high. They're screened over with chicken wire with about one third of the roof covered with sheet metal that provides shelter from bad weather. One side of the pen is also closed in with plywood. If it rains or gets cold, the 75 to 80 birds in each pen huddle together in the closed-in, protected area.

Salatin moves each pen to a fresh piece of pasture every day. He slips a wheeled dolly under one side of the pen and pulls or pushes from the other side. That keeps birds from permanently damaging the grass so that it will grow back for another feeding and it also keeps them very clean. There's a small trough feeder in each pen and a waterer hangs from the roof of every pen. Waterers are hooked up by hose to a 5-gal. plastic bucket which rests on top of the pen.

"The pens give us the efficiency and safety of confinement but the vitality and vigor of open range. Chickens receive a fresh 'salad bar' every day and have a much more hygienic environment than in a confinement barn. We put birds out on range at 2 weeks. Before that they're in our brooder house where we can put heat on them," says Salatin, noting that he allows about 1 acre of pasture for every 500 birds.

Key to success of Salatin's operation is his marketing system. He sells direct to customers who come to the farm the day birds are butchered. "We do not bag, freeze, cut up or deliver. About 70 percent of our customers come from within 50 miles, with 30 percent coming from farther away. We send out a newsletter each February to our list of customers and ask them to notify us if they want birds that year. Then we set up a rotating schedule for the entire growing season and send customers a notice telling them what day we'll be butchering their birds. We're starting new batches all the time and the system is setup so we only raise and butcher as many birds as we have orders for."

Salatin raises an average of about 7,000 birds a year. He doesn't call his birds "organic" because he uses commercial feeds that he doesn't grow himself and he doesn't charge premium prices for his birds. "Because of the low overhead of the system we use, we sell our birds at a competitive price with larger birds in the supermarket. We're not looking for the 'health food' clientele like many of our luxury-priced organic competitors. We just want customers who want the best possible chickens at a good price," he says, noting that the result of that approach is a product that's easy to market. All sales result from word of mouth. He doesn't do any advertising.

Salatin says a couple working 50 hrs. a week on 20 acres for 6 months per year can net tens of thousands of dollars with his system, with a total investment -- not including land -- of half that. "I know of no other more golden opportunity in agriculture today," he says.

The system could also be used for layer hens, by adding nest boxes to the sides of the pens, as well as for turkeys. In fact, when Salatin first started working with the idea as a teenager, he was raising rabbits in his portable pens.

Salatin has put together a detailed booklet with diagrams, blueprints, and all production and processing details.