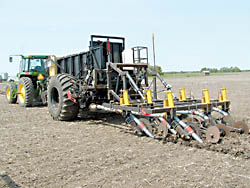 Last year Canadian engineers demonstrated that solid manure can be injected directly into the ground, by developing a machine that compresses the manure and drops it into deep trenches and then covers it up.

"Our machine will inject manure that won't flow in a liquid slurry system, including feedlot manure, poultry manure and municipal waste," says engineer Hubert Landry with the Prairie Agricultural Machinery Institute (PAMI) in Humboldt, Sask. The PAMI program is in collaboration with the Department of Agricultural and Bioresource Engineering and the Department of Soil Science at the University of Saskatchewan. "It greatly reduces problems with runoff and odors, distributing the manure uniformly across the width of the machine, much more evenly than you can with a conventional manure spreader. Another advantage is that we can calibrate the machine, which results in more control of the application rate."

The machine was tested for the first time last spring as part of a 3-year field test that will continue using a variety of solid manure. "Our goal is to bring the technology for solid manure to the same level that exists for liquid manure. There could be a huge savings in transportation costs because liquid manure consists mostly of water," says Landry.

The PAMI engineers built a special bulk container with augers powered by a pto-driven hydraulic pump. Four hydraulically-driven, 12-in. dia. augers run the length of the container and push the bottom layer of solid material backward. When manure reaches the rear of the container, it flows under a flow-control gate and drops into a transversely mounted 12-in. dia. auger, which pushes the material toward both the left and right. The auger drops manure into six adjustable ports that feed directly into the injection devices. The injection devices consist of a tapered auger that feeds a flexible auger. The tube diameter is reduced from 6 in. to 3 in. in a conical section, which compresses the manure and reduces the size of the trench that needs to be cut in the ground.

The output ends of the cones are attached to flexible steel tubes that lead down to the soil surface. The tubes contain flexible 3 1/2 in. dia. augers on straight steel shafts that bend via universal joints. Each auger is driven by a separate hydraulic motor. Manure exits the tubes and falls into 5-in. wide by 5-in. deep trenches opened by 24-in. dia. coulters. Then 18-in. dia. coulters close up the trenches.

The flexible tubes are supported by square metal tubing and are free to slide back and forth inside metal sleeves bolted to the tubing, in order to apply the manure at a uniform depth no matter the ground conditions or contour.

The machine is mounted on big 4-ft. high flotation wheels that provide the clearance needed for the augers and coulters.

"Our prototype machine handles between 3,000 and 4,000 lbs. of solid manure. It isn't nearly as large as a commercial field unit would be. We haven't worked with any manufacturers yet, but we think the machine could be adapted to a commercial scale pretty fast," says Landry.

"Most of our work has been with composted beef manure but the same idea would probably work on other types of solid manure, too. If the system ever plugs up it's usually in the cone section. The system senses a peak in pressure and will reverse the augers to eliminate the blockage. The coulters are spring-loaded so they'll trip if they ever hit a stone."