He Built His Own One-Pass Tillage Tool 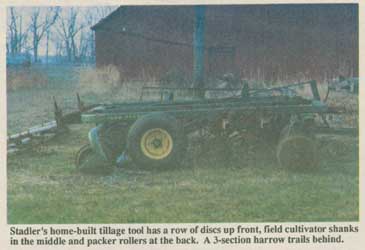 Michigan farmer Ron Stadler wanted to reduce the number of tillage trips he made over his fields in the spring, but he didn't want to spend the money for a new combination tillage tool.

So he designed and built his own one-pass implement that lets him disk, field cultivate, and cultipack all in one pass. The "Landmaster-Miser", as Stadler calls it, is designed to be a once-over finishing tool that saves time and fuel and reduces soil compaction.

"I had been going over our fall-plowed ground in the spring with a Deere 110 disk, then making a second pass with an Oliver field cultivator equipped with a Brillion cultipacker roller," says Stadler. "However, the multiple trips caused soil compaction and I also had trouble with the cultipacker rollers plugging up in sand.

"One day I got an idea. Why not put all of the tillage components together on one implement? I bought a used Deere 210 14-ft. wide heavy disk and removed all of the gangs. I chose the 210 disk because it has a heavy-duty frame that can carry a heavy load over rough ground.

"I mounted a single row of 18-in. dia. disk blades from the Deere 110 disk in front and mounted three rows of field cultivator shanks behind them bolted to lengths of square tubing that I welded across the disk frame. I took apart an old spring tooth drag and mounted one row of teeth directly behind the cultivator teeth. Then I mounted a 14-in. dia. cultipacker roller on the back and attached a 3-section spring-loaded Midwest harrow which trails behind. The cultipacker is mounted on a 12 ft. long piece of round steel tubing bolted to the disk frame.

"After testing the implement, I discovered that the cultivator teeth had to be spring loaded and spaced further apart so they wouldn't plug up with trash. Now the teeth are 20 in. apart. I also had to reverse the disk blades so they would throw trash inward instead of outward to cause less ridging. I lined up the field cultivator shanks up with the disc blades. The shanks are equipped with 8-in. wide sweeps that level off the soil. The spring drag teeth do additional leveling and also mix up the soil. The cultipacker rolls the soil, breaking up clods, and the harrow feathers it down.

"The disk frame is equipped with a self-leveling system that lets me raise the implement in soft soil or drop it down in normal soil conditions for maximum performance. I pull it with a 100 hp tractor."