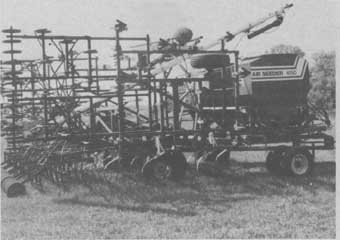 "It does the job of a state-of-the-art  air seeder at a fraction of the cost," says Robert E. Stahl, Binford, N. Dak., happy with the precision air seeder he put together from a used Wil-Rich seeder with the help of neighboring farmer-engineer Sherman Quanbeck who was once part owner and design engineer for Wil-Rich Mfg.

Stahl says there are a lot of used Wil-Rich air seeders on implement dealers' lots, as well as other manufacturers' similar field cultivator-type air seeders, which can be picked up at relatively low cost. The problem, he says, is that although farmers liked the big width and versatility of that type of seeder, they didn't like the poor seed placement.

"The Wil-Rich unit placed the seed under the sweep but it was hard to keep at an even depth. Either the sweeps skimmed the surface, often leaving seed on top of the ground, or they ran too deep, resulting in poor germination. No one ever came up with a good way to control depth on field cultivator shanks," says Stahl.

The modification consists of adding gangs of high-clearance Danish spring tines behind the field cultivator. Mounted in three rows, the tines are spaced on 7-in. centers -- centered directly between the cultivator shanks, which are also on 7-in. spacing. Each Danish tine is fitted with a depth control gauge wheel and a special seed boot -- fabricated by Sherman Quanbeck-- that drops seed in a wide 1-in. band. Stahl explains that dropping seed in a wider band behind the tines means that some seed goes to the right, some to the left and some in the center.

"Seeding in a 1-in. band allows a heavier application of starter fertilizer and causes less competition for moisture by seedlings at germination -- because seed is more spread out -- than when you use disc openers that drop seed into a narrow 1/8-in. wide furrow. In effect, it gives us 6-in. spacing between rows. Another advantage is that when we swath the crop for harvest, it helps hold the windrow up better," he notes.

Stahls says he's used the 28-ft. wide, pto-powered air seeder for wheat, flax and a new oilseed crop called crambe. "I've had perfect stands, using the machine to cultivate and seed at 5 to 6 mph with a 175-hp tractor, seeding 16 acres an hour."

One feature Stahl likes about the Wil-Rich seeder is that you can see all the seed runs as they come out of the front of the seed tanks so no electronics are needed. If a run gets plugged, it's readily visible to the eye. Another benefit is that each seed tank is divided into two hoppers so he can also carry chemicals. He plans to apply Treflan granules while he seeds, drop-ping the granules onto the ground ahead of the cultivator and letting it incorporate them ahead of the seeding tines.

"The best thing about this idea is that you can pick up these seeders cheap and because of the simplicity, it should last as long as you want. Also, parts are still readily available from Wil-Rich. I'll be happy to show it to anyone who wants to come up to my farm to see it," says Stahl.