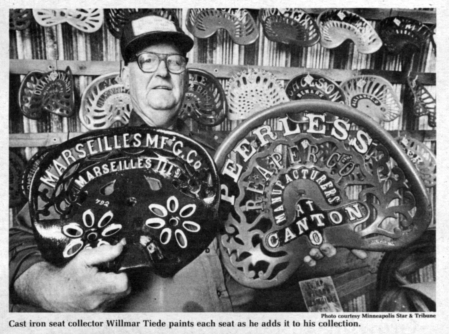 "People like to collect them because of the stories they tell," says Willmar Tiede, LeCenter, Minn., who has one of the country's biggest collections of cast iron farm implement seats. He's also an officer in the Cast Iron Seat Collectors Association, which has more than 600 members.

Tiede says cast iron seats, which first appeared after the Civil War, are significant because they signaled the end of the need for farmers to work on foot behind animals in plowed fields.

"After the Civil War factories that had been casting cannons began casting seats. Every seat has a story to tell. They're all individual and different," says Tiede.

His collection consists of about 400 seats. He says cast seats were made up until around 1900 at which time companies began to stamp seats out of sheet metal.

Cast iron seats come in all sizes and shapes, each suited for a particular use. Some are flat, some are round, and some are only half seats. Others have horns on the front to keep farmers from slipping off. All have individual patterns of letters, ventilating slots, and holes.

Tiede scours auction sales throughout the Midwest looking for seats and visits other collectors. He has about 100 seats which he's willing to trade or sell. While he has a couple extremely rare seats that he wouldn't sell, he says most are worth considerably less.