Dream Sheep Don't Have Any Wool 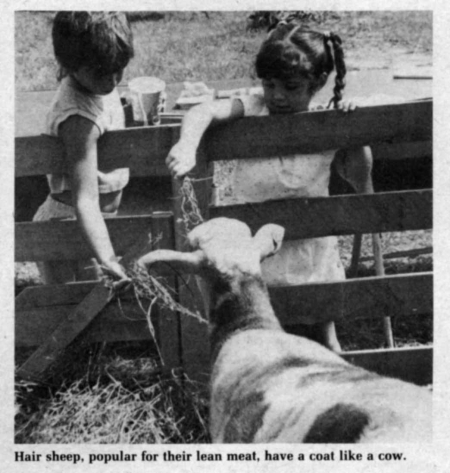 "Wool isn't worth the cost of production in the U.S.," says Clyde Burch, Bethel, Mo., a promoter of "hair sheep" which don't have any wool and thus don't require any shearing, docking, or tagging. Best of all, hair sheep produce a leaner meat -- without the fatty deposits developed to coat wool with an oily layer -- that's more in demand by consumers.

Hair sheep have a fine coat like a cow and are widely raised in many other countries throughout the world.

"Consumers don't want fat meat anymore. Consumption of lamb and mutton has dropped to less than 2 lbs. per person per year. Hair sheep produce a lean meat without marbling that's more nutritious and contains less cholesterol. Hair sheep also have more multiple births, earlier puberty, and lamb twice a year. They don't burn up energy to produce wool and they require much less work to raise.

Some of the hair sheep breeds available in this country are Katandin, Wiltshire Horn, Barbados Blackbelly, Texas Barbalo, and St. Croix. The sheep thrive in cold northern areas but they do require more outside protection from rain, snow and sun than wool sheep.

Burch, who raises several hair sheep breeds, sells most of his meat directly to consumers. "They definitely prefer it to wool sheep. Many people who say they don't like lamb find our breed much to their liking."