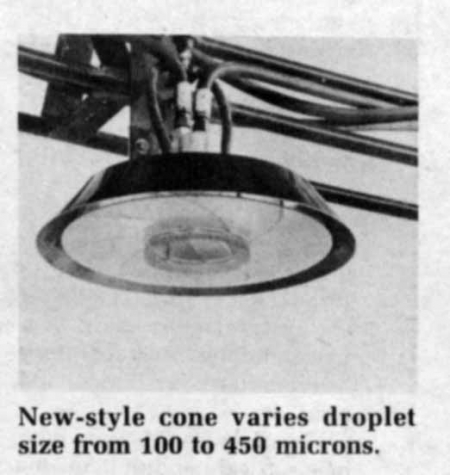 An Indiana manufacturer says he's turned the high-tech spray world upside down by inverting the cone on his new sprayer so that, unlike other cone-shaped micro-jet atomizer sprayers on the market, it's positioned with the wide end of the cone towards the ground.

"Rather than throwing chemical straight out to the sides, this sprayer directs air flow toward the ground. It delivers chemical at rates from 1/2 gal. to 4 gal. per acre," says inventor Ray Shepard.

Jet Cones feature infinite speed control from 1,000 to 4,000 rpm's that combines with various flow rates to produce 100 to 450 micron droplets. A fan inside the inverted cone creates turbulence that causes leaves to flutter, increasing the under surface penetration of chemical. The air pattern remains at the same angle regardless of the speed of the Jet Cone. The cone and fan are one piece so there are no springs, clutch or other moving parts.

"It provides a uniform umbrella-shaped wall of air that deposits chemicals in an even pattern. It also lets you spray at varying rates from the smallest droplets to conventional 40 gal. per acre rates," says Shepard.