Outhouse Smoker Powered By The Sun

(If your subscription is current, click here to Login or Register.)
2017 - Volume #41, Issue #4, Page #22
[ Sample Stories From This Issue | List of All Stories In This Issue  | Print this story  | Read this issue]
«Previous    Next»
Outhouse Smoker Powered By The Sun
John Benoits smoker may look like an old fashioned outhouse, but it has solar power, computerized controls and Wi-Fi. He uses the 5-ft., 11 in. tall, 29 by 32-in. steel box for family meals, as well as taking it on the road for catered events.
It started out as a standard, steel box smoker the size of a small refrigerator, but I wanted something different, says Benoit. I had a drawing of an old outhouse and built the exterior from it.
Benoit framed the outhouse with 1-in. square tubing and used fiberglass insulation and styrofoam around the smoker before attaching 1 by 4-in. cladding. A warming oven mounts under the roof.
The smoker door has a handle made from Osage orange wood and a solid brass crescent moon salvaged from an antique door. Large caster wheels support the outhouse. They make it easier for Benoit to winch the smoker into his 16-ft. trailer for transit.
I dont know how much it weighs, but between the steel and the 2 boxes of firebrick on the bottom, it is heavy, says Benoit.
A thermometer is mounted between the doors of the smoker and the oven, but the computer and Wi-Fi are key to the operation.
The star of the smoker is the Flame Boss 200 controller, says Benoit. It is the best tool I have bought for saving time and improving the quality of meat.
Sensor probes in the smoker are wired to the controller, which in turn runs a small compressor. When more heat is needed, the compressor feeds air through a 4 by 4-in. steel tube at the base of the smoker. This manifold delivers the air to the charcoal bed in the smoker.
A solar panel on the roof powers the controller and fan with wiring for 110V backup. The Wi-Fi lets Benoit monitor and manage the entire process whether standing alongside or miles away.
I can put in meat for a family meal, leave for lunch and shopping, and come home to a perfectly cooked meal, says Benoit.
The same holds true for Benoits catered meals, as well as the pulled pork he sells locally. The Wi-Fi allows him to constantly monitor and adjust the cooking process, but it also collects data.
I have a history of all the cooking temperatures and more, including the fan output, says Benoit, who has years of experience catering events.
A baffle over the charcoal spreads heat out. A water pan above the baffle keeps the meat moist, while a second pan above it catches dripping fat.
I used restaurant chafing pans that are 4 in. deep and 12 by 34 by 20 in., says Benoit. I put foil over the water pan and poke a hole in it with a pencil. The hole lets out just the right amount of steam, and the water lasts for an entire 8 to 12 hr. cook.
Another secret he shares is how he stores his smoke-producing wood. Once he has soaked it, he puts it in a plastic bag and sticks it in the freezer.
To produce the smoke flavor I want, I pull them out of the freezer bag and lay a few pieces on the coals, says Benoit.
Contact: FARM SHOW Followup, John Benoit, 2486 Sportsman Club Rd., Bourbonnais, Ill. 60914 (ph 815 791-3605). 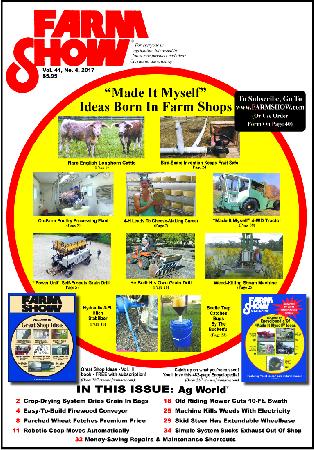