(If your subscription is current, click here to Login or Register.)
2017 - Volume #41, Issue #2, Page #17
[ Sample Stories From This Issue | List of All Stories In This Issue  | Print this story  | Read this issue]
«Previous    Next»
British Farmer Inventions
Round Bale Accumulator
Herefordshire farmer Wayne Heaths round bale accumulator helps speed up the job of collecting hay and straw for his 350 ewes.
A hydraulically-operated gate holds one bale on the rear table until a second one is ready to be released from his Deere baler, leaving pairs of bales across the field. The ram to release the bales is operated on a separate outlet so Heath can drop the bales wherever he wants. The bale platform pivots on the axle so it moves freely if it should bump the ground.
Chainsaw Tree Trimmer
Northern Irishman Cyril Patterson built this chainsaw tree trimmer on a maneuverable arm that allows him to pivot the chainsaw upwards, downwards, or from side to side.
He used a telescoping ram off a dump truck to mount the saw, which can reach up to 45 ft. off the ground. At the base of the attachment is a steel box that houses two geared cogs that allow the saw arm to pivot.
Stone-Picking Barrel
Colin Fergusons fields are littered with boulders that regularly need clearing. Scooping them up with a loader removed too much dirt so he built this rotating stone barrel that scoops up rocks and then rotates hydraulically to allow dirt to fall back into the field.
He started with an old 3-pt. mounted cement mixer, converting the mounts to fit a front loader. He replaced the barrel of the mixer with steel bars in a cylindrical shape. The only change he plans to make is to slow rotation of the cylinder so rocks are not thrown around as hard when turning.
Alligator Bale Grab
Kent livestock farmer Hugh Richards collects 1,500 small square bales a year from grain fields. He couldnt justify the cost of a big bale accumulator so he built this big bale grabber for his telehandler.
The Alligator Grab, as he calls it, has rows of 11-in. spikes on either side of long arms that extend out front of the loader. Curved ends allow the arms to float along the ground while a cylinder at the base of the arms moves them in and out to grab bales. He uses it to haul bales to the edge of the field to pick up later with a tractor. 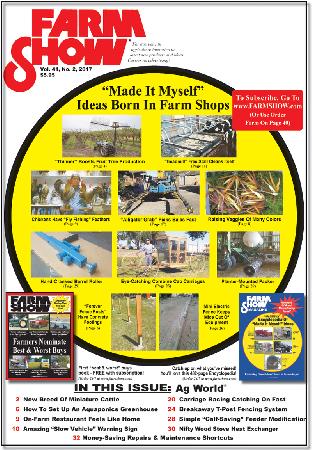