(If your subscription is current, click here to Login or Register.)
2016 - Volume #40, Issue #4, Page #22
[ Sample Stories From This Issue | List of All Stories In This Issue  | Print this story  | Read this issue]
«Previous    Next»
He Built Working Mini Hit And Miss Diesel Engine
My dad Richard loved collecting old Deere, IH and Hercules hit and miss engines, says Rich Holt. After he retired he bought a casting case for a small hit and miss replica and decided to build his own diesel-powered unit.

Holt says dad used his experience working with gasoline hit and miss engines and his skill as a machinist to build the diesel version that looks as nice and runs as smooth as a Swiss watch. When you see the finished engine youd swear it was made by a factory that had turned out hundreds of them.

To build his tiny masterpiece Holts father used an injector from a spare engine and put it in the diesel casting. The crankshaft came from a Briggs and Stratton lawn mower. Richard made valves from allen bolts that he turned on his own lathe. He also made the injector pump. The camshaft was from an old lawn mower engine and the flywheels he made from a brass gear sprocket. He attached a special tool to the flywheel so he could start it with a 19-volt battery-powered drill.

Holt says his father was a real stickler for details and enjoyed the challenge of building part by part. The mini engine measures 12 by 18 in. and is 14 in. tall. It has a governor that holds top speeds between 1,200 to 1,400 rpms and idles it down to about 800 to 900 rpms. Holt remembers his dad working on the engine for nearly 6 mo. before it finally ran to his satisfaction. After it was done he envisioned building a kicker, similar to those used to start an old Maytag motor, to start his engine.

Holt says after Richard retired in 2001 he built a nice heated barn with a machine shop for his lathe, milling machine and surface grinders. Even though his father passed away a few years ago, his hit and miss collection is still pretty much intact. He and his brothers have fond memories of the small engines and the satisfaction their father got from maintaining, repairing, tuning and running them. Says Holt, I dont think my brothers and I are getting rid of the collection, especially the diesel, anytime soon. 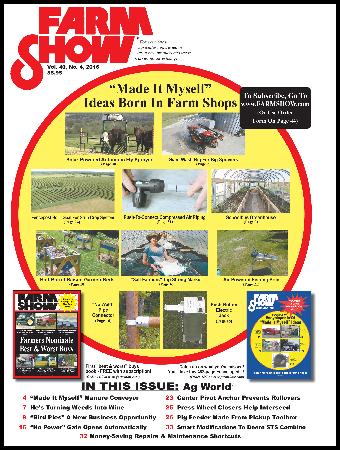