(If your subscription is current, click here to Login or Register.)
2016 - Volume #40, Issue #1, Page #17
[ Sample Stories From This Issue | List of All Stories In This Issue  | Print this story  | Read this issue]
«Previous    Next»
Iowa Farmer Says, We Sell The Worlds Best Cornheads
We want to be good at one thing, and thats cornheads, says Dennis Bollig, president of Dragotec USA, while introducing the latest new Italian-built GT Series header at a media event held recently on his farm near Fenton, Iowa. The people we buy our heads from in Italy are a family-run business, too. Cornheads are all they build.
Bollig and his wife, Darlene, started their business back in 2001 after buying their first two Drago cornheads. At first they were mainly interested in headers equipped with stalk chopping blades. But I quickly got a sense of how gently their header handled corn. We started showing other farmers and then made a decision to import headers and set up dealers.
The new GT series features more innovations than any other cornhead on the market. It will change our idea of a cornhead and its role in the future, says Bollig. Modern day combines are marvelous machines. But without a good corn head, combines are nothing but a 400 hp stalk stomper.
Here are some of the features found on the Drago cornhead:

Automatic Self-Adjusting Deck Plates
Bollig says Dragos self-adjusting deck plates provide a new level in kernel capture technology.
Modern corn genetics are giving us dryer corn than ever before at harvest, which is a good thing. The problem is that its now more challenging to have the deck plate set properly, says Bollig. Hydraulic deck plates adjusted by the operator is a guess at best. Our new design will make them obsolete.
Every stalk and every row is precision measured to reduce shelling loss, says Bollig, noting that pull springs and large pistons make the deck plates very responsive to crop changes, with no need to make manual adjustments.

The new deck plates work together with a new Quad Suspension system that uses 4 mini shock absorbers, called ear shocks, under the deck plates to eliminate corn bounce and limit butt shelling, a significant cause of yield loss. The shock absorbers are fitted with compression springs, and the deck plates rest on top of them. No lubrication is required.
The deck plates are able to actually absorb the terrific energy of ears as theyre pulled down by the knife rollers, says Bollig. This is especially important with todays hybrids that dry down faster in the field. When those ears hit deck plates, the impact results in excessive shelling leading to yield loss. Quad Suspension helps the deck plates absorb that energy, reduce shelling and capture more corn at harvest.

Twin Chopper Plus
Anyone who wants to chop stalks at harvest will be interested in Dragos new Twin Chopper Plus option, which features 2 counter rotating blades that offer more than what a single chop option can deliver. It delivers the most efficient cut and stalk breakdown in the industry, says Bollig. It doubles the chopping ability without doubling the horsepower.
One chopper is located slightly ahead of the other to provide maximum coverage. Other companies run their stalk rollers extremely fast to try to do some sizing with their stalk rollers. With the GT design, we can run the stalk rollers at the correct speed to pull the plant down slowly for maximum yield retention.
The counter rotating knives provide the accumulated energy of having 2 knives approaching each other at high speed. It puts a tremendous amount of energy into that stalk to size it up and pulverize it, says Bollig.
Another advantage of the system is that the chopping process isnt started until the stalk is well into the stalk roller. Some of our competitors chop the stalk way forward before its even into the stalk roller, which can cause more shelling, says Bollig.
The GT is also available with a single chopper, which comes with a handy shut-off lever. The shut-off feature is handy for farms where you want to chop stalks and other farms where you dont want to. The single chop option offers exceptional chopping quality and uses the least amount of horsepower of any corn head in the industry.

Dynamic delivery is a combination of features and designs that help the cornhead pick up stalks. It results in less ear bounce and shelling than any other head on the market, says Bollig.
The GT auger has the largest diameter of any major cornhead brand. It has a deep trough that runs 28 percent pitch which gives a lot of capacity to carry corn rapidly but gently to the center of the header. The auger turns at barely over 100 rpms to create that gentleness. The augers large center tube keeps corn in the feederhouse by blocking the window of escape for the ear.

Enduro Drive
The GT cornhead powertrain system, called Enduro Drive, uses a totally chainless design that delivers power directly to header components. The design allows power to be driven in-line through the row units, eliminating two gears per row, says Bollig. The auger is also gear-driven for durability and easy.
Cornheads typically use roller chains to drive the row units and augers because its the simplest and cheapest thing to do, says Bollig. The problem is, the chains need attention and constant adjustment because as they wear they stretch. And they need to be changed multiple times over the lifetime of the header. The GT series is the only cornheader in the industry that offers a totally chainless drive system.
Power comes from a heavy-duty gear drive gearbox, which has a straightforward design with no corners. A massive jackshaft delivers power to another gearbox that drives the row units. The Enduro Drive system eliminates 2 gears per row compared to competitors, making this drive system the most efficient on use of horsepower of any header on the market.

Spiraled Bevel Gearboxes
GT series gearboxes feature the industrys first spiral-cut gears - common in the aviation and automotive industries  to deliver power more efficiently, reduce gear maintenance and significantly increase gear life.
These components help you spend less time on maintenance and more time in the field during harvest, says Bollig.
A spiral gear is a curved gear; a bevel gear is a straight-tooth gear. The difference between a beveled gear and a spiraled gear is the difference between a corner and a curve. If youre driving and come to a 90 degree corner, youve got to slow down then re-accelerate once you get around the corner. You lose some energy doing that. If you come to a curve, you can maintain much more of your energy when you go around it.

Independent Component Protection
An industry first, it incorporates a radial pin slip clutch into each individual component. Most other headers on the market have one slip clutch per row unit for the entire head. That means the torque load of the main slip clutch is set very high to handle all the torque loads of all the individual components working together, says Bollig.
With independent component protection, each component including the chopping blades, stalk rollers, and gathering chain drive system, has a clutch thats set precisely for the torque load to protect that component. It extends the life of each of these components.
Lets say youre combining over part of an old building site and hit something. We want to protect the component that it engages first, rather than wait for the load to build up enough to trip one slip clutch for the whole header. Precise settings for each component are incorporated right into the part.
The Drago GT is available in models ranging from 4 to 18 rows and 30 to 40-in. row spacings. Eight and 12-row folding models are also available.
Prices for the GT heads are expected to be about 5 percent more than the competition, depending on the model.
Contact: FARM SHOW Followup, Dragotec USA, Inc., 3701 30th Ave., Fenton, Iowa 50539 (ph 888 789-2723; dustinbollig@dragousa.com; www.dragotec.com). 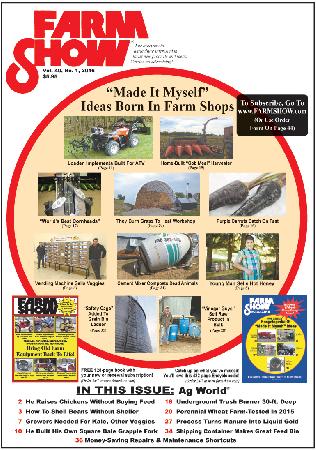