Having Fun With '59 Caddies

FARM SHOW Magazine » Having Fun With '59 Caddies
You have 4 free stories remaining.

(If your subscription is current, click here to Login or Register.)
2008 - Volume #32, Issue #6, Page #23
[ Sample Stories From This Issue | List of All Stories In This Issue  | Print this story  | Read this issue]
«Previous    Next»
Having Fun With '59 Caddies
Elvis would have liked this. There are a lot of things you can do with a '59 Cadillac, or at least such is the case for Roger Gutschmidt and his friend Dale Donat. The pair was inspired to transform seven different junkyard '59 Caddys (for parts) into a collector's dream of pink Cadillac fun.

Gutschmidt, of Gackle, N. Dak. did most of the work on his farm, while Donat, a collector from Spearfish, S. Dak. offered up suggestions, some physical help, and financial compensation.

After locating the rusty, beat up base units in junkyards, they completely restored one, using the other units for parts. They painted it pink and, with all that chrome, Donat had a perfect parade car.

Yet, the pair hated seeing what was left over go to waste, so a couple of years later they turned the back end of one of their "parts cars" into a flashy couch, and then converted the front end of the another parts car into an equally unique Pink Cadillac desk.

"There were a few challenges in these projects, but Dale is a real optimist and he encouraged me," Gutschmidt says. "The cars we started with were real wrecks so the sheet metal needed to have dents taken out. You had to be able to visualize what it was going to look like, and get creative in problem solving.

"The couch and desk each took a lot of thinking and planning." Gutschmidt says. "The first thing we did (for the couch) was crudely cut off the rear end with a cutting torch, about 6 in. to a foot further than where the final cuts would be. We did the same for the desk on the front end."

They used the original back seat for the couch, but positioned it in place of the trunk and had to cut and shape the seat so it would nicely match the shape of the bumper. They also reupholstered the seat with fabric from a restoration company, matching what an original Caddy would have looked like.

The pair's '59 Cadillac front end desk is especially loaded with chrome, since it has both a bumper and a grill. All of these parts had to be re-chromed.

"We made sure there were no sharp edges anywhere that we cut the metal. For the desktop, we installed a removable piece of 3/4-in. plywood with black Formica on top - it sits in a ledge just behind the hood, and ahead of the fender," Gutschmidt says.

Since power converters were deemed too expensive, the most challenging aspect of making the desk was devising a way to have working headlights. They chose to install small 110-volt bulbs inside the original lenses, which in itself was a feat. Their solution was to strengthen the lenses by covering them in duct tape, and then delicately sandblasting a 1 1/2-in. hole in the back of each of the four headlights.

"They look like real headlights that way," Gutschmidt points out. "We didn't want it to look fake." 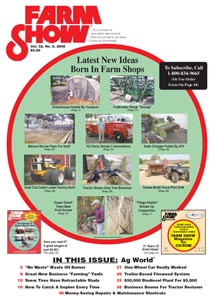