Moving A House? Take Your Basement With You!

FARM SHOW Magazine » Moving A House? Take Your Basement With You!
You have 4 free stories remaining.

(If your subscription is current, click here to Login or Register.)
2001 - Volume #25, Issue #3, Page #02
[ Sample Stories From This Issue | List of All Stories In This Issue  | Print this story  | Read this issue]
«Previous    Next»
Moving A House? Take Your Basement With You!
Ron Huyde, Canora, Sask., has been moving grain elevators and other big buildings for years. He figured that if he could move something as big as a grain elevator, why couldn't he move a house with the basement on?

During the past four years Huyde has moved more than 50 homes with their basements intact. He's also developed ways to move big farm shops, seed cleaning plants, and fertilizer storage buildings with their cement floors still on.

To move a house with the basement attached, Huyde uses special-designed hydraulic lift jacks. If the basement has a cement floor, he normally just moves the walls because the floors are too fragile. At the new location, the walls are lowered onto newly-poured footings.

A backhoe first digs a 2 to 4-ft. wide trench around the basement, down to the floor and part way under it. Then he replaces the backhoe's bucket with a 6-ft. long, hydraulically-operated "snout" that makes a series of 30-in. sq. holes in the dirt under the walls spaced about 12 ft. apart. The hydraulic jacks are placed inside these holes and used to raise the walls so they can be blocked up with steel I-beams laid crosswise under the house. He keeps jacking upward and adding I-beams until the basement is out of the ground. He then "wraps" cables around the basement to keep the walls from twisting.

At the new location, the hydraulic jacks are used to lower basement walls onto new footings. Then a new floor is poured, all the utilities are hooked back up, and the area around the basement is backfilled.

"People like to watch us work. We get some pretty big crowds and are often the talk of the town'," says Huyde. "A lot of people don't think it will work until they see it done. A house with its basement still on weighs a lot more so to support that extra weight we have to add extra wheels to the trailer. It takes eight extra wheels to move an average size house. The house also rides a lot higher so you also have to consider power lines when moving.

"From the customer's viewpoint, it's a pretty neat way to move a house because in only a couple days you can have the house back in almost exactly the same shape it was in before you moved it," says Huyde. "You have to lay new sewer lines before pouring the floor and do some other plumbing work. However, the power panels are usually located in the basement so you don't have to do a lot of wiring. The entire process takes only about four days. You can start moving the house on a Monday and by Thursday you're back to living exactly as before.

"It costs about $10,000 more to move a house and basement together than it does to move just the house. That's about as much money as you'd spend to build a new basement. However, you eliminate some costs because you don't have to plumb in new water and sewer lines or make new phone and electrical hook-ups. We've done jobs where we moved the cement floor with the house, but we had to add a lot of floor support, which gets expensive.

"We generally use 16 hydraulic jacks around a typical 32-ft. wide, 50-ft. long house. The key to these jacks is that they work on oil volume, not pressure. They all get the same amount of oil and therefore all go up at the same rate. It doesn't matter if one jack is supporting 500 psi and another one 4,000 psi - both will go up the same distance because they're both using the same volume of oil."


Moving A House? Take Your Basement With You! BUILDINGS Houses Ron Huyde Canora Sask has been moving grain elevators and other big buildings for years He figured that if he could move something as big as a grain elevator why couldn t he move a house with the basement on? 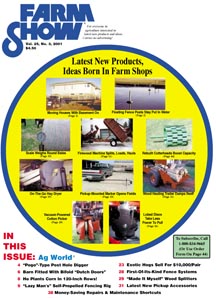