Grooving Heads To Save Fuel Catching On Fast 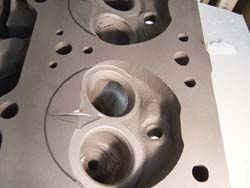 As gasoline gets more and more expensive, everyone paying at the pump is looking for ways to economize.  In the past few years FARM SHOW readers have written us describing how a simple process of "grooving heads" can cut fuel use by 20 to 40 percent.  FARM SHOW reader Frank Akins of Leavenworth, Kan. wrote that a friend of his had grooved cylinder heads on his Dodge 360 cu. in. race car engine (Vol. 32 No. 1). He experienced greater mid-range torque and better fuel efficiency.   John Schrock, a repairman from Jamestown, Penn. and his uncle Robert grooved pistons on an Imperial Diesel and saw 25 to 30 percent fuel savings.  Robert also ground a 3/32-in. deep by 1/16-in. wide groove in heads on a small diesel engine and says, "I figure I gained 50 percent more power."

Fred Balk, a retired millwright in Michigan, contacted us recently and said he has used the grooving process on three Cub Cadet KT17 engines.  "I put the heads in a Bridgeport milling machine at a 2 degree angle.  I use a 1/16-in. ball nose end mill and put a shallow groove at the squish area and deeper toward the center."

Balk says the first heads that he grooved were on a Cub Cadet 782 that was very difficult to start, especially in cold weather.  "After I did the grooving, we couldn't believe how well it started. It turns over once and pops to life."  Balk has since done two more KT17 engines with the same results and will be grooving an Onan engine this summer.

"This process has been around quite a few years," Balk says. "In fact there's a patented process claimed by an Indian engineer Somender-Singh.  I've heard of people in the drag racing and high performance car business that have done it with good success," Balk adds.

Somender-Singh claims that additional nitrogen being squeezed through the grooves disperses the combustible oxygen molecules more efficiently into the fuel. That efficiency leads to increased torque, increased low-end power, and overall fuel savings with lower emissions. Engines burn cleaner at lower operating temperatures and the capacity for a more efficient engine without the dreaded  "Mr. Knock" or "Miss Ping".

Somender-Singh writes that "this simple but radical design change to squish areas and configurations enhances progressive turbulence in the charge close to the skin of the combustion chamber and further directs the (added) turbulence toward the igniter followed by multiple flame front propagation."

That's a complex technical explanation for a laymen's benefit that shows more power and fuel savings of up to 42.5 percent.  Balk agrees with that assessment and says if more people are interested in having it done, "I'll have to change it from a hobby into a part time business."