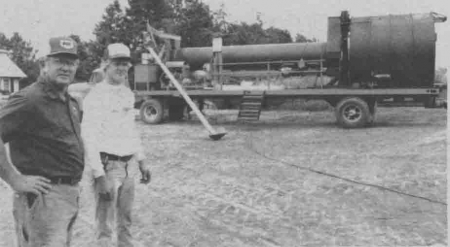 It's "humongous". One of the most ambitious farm shop projects we've seen lately.

It's the "you've got to see it to believe it" go-anywhere soy-bean cooker designed and built by Nebraska farmer Dale Harlan and his son Todd, of Hickman.

Mounted on a 40-ft. semi trailer flatbed, it goes right to field or feedlot to cook and cool soybeans at the rate of 5 tons per hour.

"We're really sold on cooked soybeans," says Dale, noting that cooking retains the fat content with only a slight reduction in protein. Cooked beans carry 17 to 18% fat content, compared to only .5% in soybean meal.

Raw soybeans are dumped into the hopper of the cooker's loading auger. They're weighed (to keep tab on the exact number of bushels processed) as they drop into a 20 bu. holding hopper. From here, they move into the long, horizontal drying tunnel. Made of old propane tanks, it's about 30 ft. long, 38 in. in dia., and revolves at 25 rpm. Flow of beans through the drying tunnel can be slowed or sped up, as needed, by mechanically raising the output end of the drying tunnel, which has 30 in. of height adjustment.

The LP-gas burner and blower, salvaged from a crop dryer, deliver 4.5 million btu's. "We drilled out the holes to boost the heat output," explains Todd. A 320 gal. propane tank mounted on the trailer holds enough fuel for about 10 hrs. of operation. A 77 hp irrigation generator provides power for the fan motor.

The large drum at the rear is divided into two compartments for cooking and holding cooked beans as they exit the drying tunnel. In one cycle, freshly cooked beans empty into Compartment A while beans in Compartment B are being cooled down. On the next cycle, Compartment B becomes the holding bin while beans in Compartment A are being cooled down. The arrangement allows the Hickmans to cool and dry cooked soybeans right on the truck at the rate of 5 tons per hr. "We can go directly to storage with cooked and cooled beans without having to jockey around with separate holding wagons or bins," explains Dale

The entire rig weighs about 30,000 lbs. and is "road legal" for doing custom work. If anyone part malfunctions, the entire system shuts down automatically.

"Interested FARM SHOW readers are welcome to come and see our cooker if they like. But you'd better call or write first to make sure one of us will be around, and that the rig isn't out someplace doing custom cooking," says Dale.