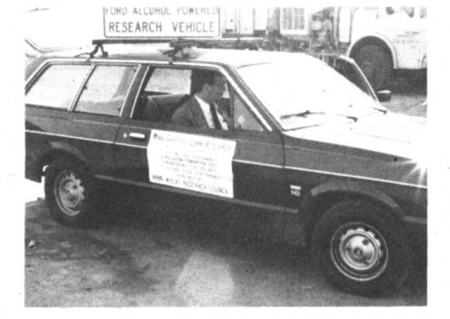 Glenn Kiecker, secretary of the Minnesota Alcohol Fuels Association, is enthusiastic about alcohol fuels and, to prove it, he went all the way to Brazil to buy an alcohol-powered Ford Corcel, a car about the size of an American Ford Fairmont.

"The alcohol fuel movement isn't dead, it's changing. A good example of that came recently when Texaco announced they were no longer going to sell gasohol in their stations across the country. Everyone assumed that decision was one more nail in the coffin of alcohol fuels but the truth is that Texaco plans to sell even more alcohol than before. But they're going to call it 'premium unleaded fuel with ethanol added' because consumers accept that name much better. Texaco is actually building their own 60 million gallon alcohol plant," Kiecker told FARM SHOW.

As for his Brazilian car, Kiecker has averaged 23 mpg so far with the mid-size wagon. He powers it with 160 to 180 proof alcohol. Although the engine has a small gasoline reservoir for cold morning starts, it was designed to run only on alcohol.

In the accompanying photo, Kiecker explains the workings of the car to former U.S. Congressman Don Fraser.