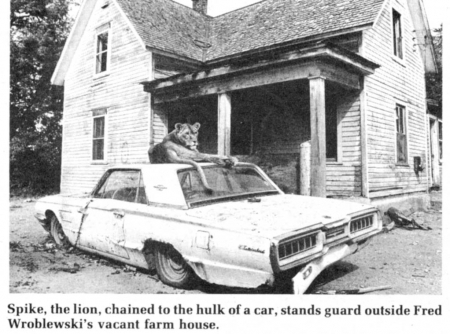 Minnesotan Fred Wroblewski, of Little Chicago, was tired of the vandalism that was occurring at the vacant farm house he owned. So he decided to have his friend "Spike" move onto the farmstead as a deterrent to would-be vandals.

So far, it's working. For one simple reason.

Spike is a lion. King of the Jungle. A watch Cat with a capital 'C'.

An old car hood, propped up in the driveway, bears spray-painted warnings: "Keep out! No trespassing. Man Eater Lion".

The neighbors, as you might guess, aren't thrilled with Wroblewski's choice of farm protection.

"A lion? Here? Out in the middle of the boonies? I mean, really," said Phyllis Fyler, who lives across the gravel road from Spike's new abode. "It's come to a pretty pass when you have to run down there in the morning to see if the lion's still there or if he's in your house or on the loose. I don't even want to go out and mow the lawn -- it's like Africa around here."

Fyler and other neighbors have complained to authorities about the lion, but there apparently is nothing illegal about keeping a lion in your farmyard in Minnesota.

"There are all sorts of laws about raising pheasants and you can't keep deer or other wild animals as pets," said Rice County Sheriff David Schweisthal. "But there's absolutely nothing that says you can't have a lion."

Spike, the sheriff noted, has been castrated, declawed and defanged. But the 3-year-old lion, who weighs between 300 and 500 lbs. (nobody has asked him to step on a bathroom scale), is still a powerful beast with an imposing appearance.

"Psychologically, the lion is really doing the job for Wroblewski," the sheriff said. "Nobody's been bothering the place since he put that lion there."

Spike spends most of his time sleeping on the roof of a wrecked Thunderbird parked next to the house. Occasionally, he leaves his perch to walk around the unfenced yard on the end of a 30-ft. steel chain and to munch on dry dog food or meat scraps left for his enjoyment by Wroblewski.

Fyler, who takes care of her two grandchildren while her son is at work in Minneapolis, doesn't think much of Wroblewski's judgment. Guns on the wall of her home, normally unloaded, are loaded and ready these days, should they be needed.

Fyler continued, "Sure, he feeds him twice a week. But what happens the other five days? Is he going to use the neighbors for fresh meat? He may be defanged, but he's still got teeth and they can do an awful lot of damage. I feel sorry for the animal. I wouldn't treat a dog that way. If it's a pet, it shouldn't be left alone."

Fyler says the neighbors received no warning when Wroblewski put the lion on the farm. She said it was first discovered by a farmer who was interested in buying some machinery parts Wroblewski had on the place.

When the farmer drove his moped onto the farm to inspect the parts, she said, "he heard something jingling behind him and turned around and here was this great big lion! He had the moped running again before he even jumped back on, he got out of there so fast! And he was white as a ghost!"

Fyler first heard of Spike when her 7-year-old granddaughter came home and told her a neighbor boy said there was a lion down the road. "I told her, 'Oh, Jennifer, don't you know when people are pulling your leg? There isn't any lion around here.' But there was!"

Fyler used to let her grandchildren ride their bikes down the road to visit their friends. Now, she takes them in her car.

"This might be fun and jokes and games to somebody 100 miles away from here. But when it's your family, you think twice about laughing."

Wroblewski, who owns a body shop in nearby Northfield, Minn., is unmoved -- and amused -- by Fyler's complaints.

"She's gotta watch her kids now so they don't go down there and tear the hell out of the place," he said.

"I've called the sheriff 7 or 8 times about vandalism and they never do anything. Now I'm not breaking the law and people call the sheriff and they're out there looking at him every day. The only reason Spike is out there is to keep the people out."

Most of the windows in the farmhouse and the windows on a camper Wroblewski keeps there have been broken by vandals. The neighbors, however, protest that their children haven't done the damage but that they are the ones most endangered by the lion's presence.

Wroblewski said he bought Spike a couple of months ago and kept him at his rural Northfield house until putting him on the farm at Little Chicago.

"I wrestle with him all the time," he said. "He's a real gentle fellow. He just likes to sit around on that old car. He's got his own T-Bird and his own house. Maybe people are just jealous they don't have that.

"I had 1,200 chickens out there last year and dogs came out and killed 500 of them," Wroblewski complains. "If Spike gets loose, what problem is it any more than with dogs running over there killing my chickens?"

Twice a week, Wroblewski visits Spike to feed him about 60 lbs. of dog food and about 50 lbs. of meat scraps he gets from a butcher friend.

Despite his effectiveness against vandals, Spike's days on the farm may be numbered. Wroblewski says he thinks he will sell the lion to a northern Minnesota game farm and that he may move it off the farm soon.

It can't be too soon as far as the neighbors are concerned.

"You shouldn't have a wild animal where no one is watching it," Fyler said. "When it breaks loose, no one will even know until someone's child is killed. And I told the sheriff that I'd rather bury a lion than bury a grandchild."

Reprinted with permission from the Minneapolis Tribune

Editor's note: Shortly before this issue went to press, we received word that Spike the lion has a new home.

His owner Fred Wroblewski sold him to the Lodel Game Farm near Akeley, Minn. "Spike is doing wonderful. He's a real pet," reports Delores Hocevar, who with her husband, Louis, owns the game farm. "We had to put a fence up around him to protect him from the people, there's so many who want to see him."