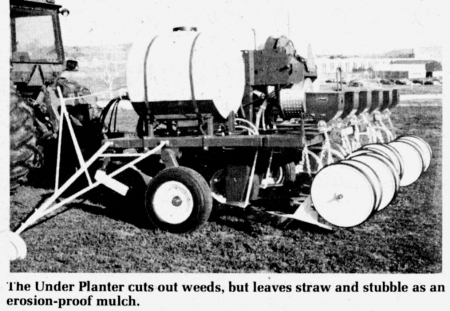 Digging through dry Kansas stubble requires a tough no-till planter that places seed into the best available moisture while applying insecticides and fertilizer. Kansas State engineers say they've got a machine that does that better than anything on the market with their new no-till Under Planter which has already been bought up by a manufacturer -- Flex King, of Quinter, Kan. -- and is slated to be on the market sometime next year.

Unlike other no-till planters, the Under Planter tills with an undercutter plow. Each undercutter blade is followed by an independently floating seed tube which actually forms a small underground tunnel to drop its seed in as it trails through the freshly dug dirt.

"This eliminates the narrow slot or furrow that most no-till planters make. When you have a slot, straw and other residue is often pushed down into the seed trench, where it robs moisture from the seed. We get more soil-to-seed contact with our method," says Stanley J. Clark, professor of ag engineering who worked with graduate student Don Suderman and others to develop the planter.

The undercutter plow is a good tool for no-till, the engineers believe, because it cuts out weeds and leaves straw or stubble for erosion protection, in effect mulching the ground. Clark notes, however, that the planting system should also work well behind a chisel plow.

A conventional International Cyclo planter, with slightly altered drives, is mounted on the undercutter frame-work above three undercutter plows on 5-ft. centers. There's a coulter at the point of each of the six 30-in. spaced blades. Liquid fertilizer tanks and insecticide containers are mounted next to the planter.

The fertilizer tubes run to the deepest point of the plow blade where the fertilizer is banded below the seed trench. The seed and insecticide tubes are mounted on a free-floating/hinged bracket that rides about 3 ft. behind the plow blade. Each row's bracket moves up and down independently on its own hinged bracket, with depth controlled by a gauge wheel, also attached to the bracket. "This is the key to the design, in that it lets the planter maintain even planting depth independent of the depth of the plow and irregardless of the varying terrain," explains Clark. Two press wheels, mounted directly above the point where the seed is injected into the soil, ensure a tight pack.

With side-mounted herbicide tanks on the tractor, the planter becomes a one-pass planter. Fertilizer injection below the seed encourages roots to grow down to moisture in dry years.

"The entire planter has relatively few moving parts and the planting components could be removed so the plow could be used just for tillage. In the same way, the Under Planter could be manufactured as an add-on for farmers who already have an undercutter or chisel plow," says Clark.

He notes that the Under Planter worked well last spring, particularly for planting sorghum in wheat stubble.

Jim Boone, President of Flex King, says the company plans to build several prototypes and test them thoroughly before going into full production, hopefully sometime in 1982.