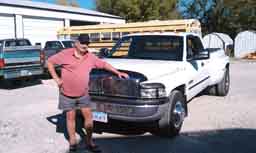 Howard Clayton's Dodge Ram 3500 is heading for the record books. Purchased new in 2000, people tell him it looks like it might have 80,000 miles on it. When FARM SHOW caught up to him, he had just passed 1,688,676 miles. In all that time, he's never touched the inside of the 5.9 Cummins engine, and it's not because he follows the book.

"The book says change the oil every 3,000 miles, but if I did that, I would be stopping every other day," says Clayton. "I change the oil and filter every 10,000 miles. That's two trips from Indiana to California."

Clayton lives in Iowa, but he tows trailers for an Indiana company, putting on more than 160,000 miles a year. Most of his trips are west. The 70-year-old has been trucking for the past 20 years. The first 10 years were in a semi, and the last 10 in the Dodge 3500.

Forest Cunningham is Clayton's mechanic, though he lives in Missouri. Cunningham himself is sort of a legend with those who know him for his work on fuel pumps and high mileage engines. When FARM SHOW contacted him, he said another customer had just left with 400,000 miles on his engine.

"That one is just a baby compared to Howard's," says Cunningham, who gives credit to Clayton for taking good care of his rig. "Once a year we clean out all the fluids and refill with fresh synthetics. He has a custom-built set of injectors, stock injection pump and an after market device that alters injection timing. He gets more than 300 hp with that engine, and I have no idea how much torque."

Clayton has had to replace the battery, alternator and lift pumps. The closest he has been to engine problems was replacing a head gasket, though he has had a couple of oil leaks over the years.

"Howard was nervous when he stopped recently," recalls Cunningham. "He was using a quart of oil every 200 miles, but it was the vacuum pump that was leaking. We resealed the oil cooler, changed oil and sent him out the door again."

Clayton says there are no secrets to what he and Cunningham do. "I try to keep an eye on maintenance, and if anything goes wrong, I take care of it immediately."

Clayton relies on synthetic Rotella 1540 for engine oil and Fleetguard oil filters. Transmission and rear end fluids are also synthetic. He gives them at least part of the credit for never having touched the 6-speed transmission or the rear end.

Clayton also uses a fuel treatment year round to keep his injectors clean, as well as using Lucas Oil Additive. He adds half a quart of the thickening agent with every oil change.

"It thickens the oil just enough for better oil pressure," says Clayton. "You don't want it too thick, especially in the winter."

Clayton says his odometer gets a lot of attention when people first notice it. "I had a small fuel leak and stopped at a Dodge dealer in Kankakee, Ill.," he recalls.

"The mechanic couldn't believe it when he saw the odometer and called the manager out to see it," says Clayton. "I told them to add a million. I had to show them an article about my truck in Diesel Power magazine for them to believe me."