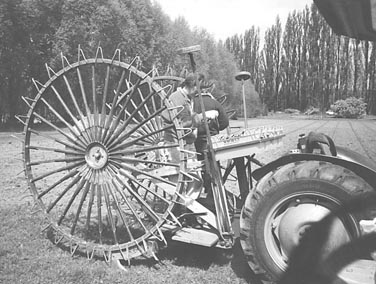 You've never seen anything like this dual-wheel tree-planting machine from New Zealand that its inventors claim is the world's fastest tree planter.

"We built it from the ground up out of odds and ends a couple of years ago. We couldn't find any other machine that would plant poplar and willow cuttings as fast and as accurately," says Bill Chapman, manager of the Earnscleugh Tree Nursery at Alexandra, New Zealand. "Last year we used it to plant 60,000 cuttings in only one week with just three people. In past years, it took four people two weeks to plant 30,000 cuttings by hand."

The planter, which mounts on the 3-pt. hitch of a utility-size tractor, consists of a pair of 6 1/2-ft. dia. wheels. Each wheel has 30 hollow spokes spaced 6 in. apart at the rim. A 9-in. long slot cut out of the middle of the spokes accommodates cuttings up to 8 in. long and 1 3/4 in. in dia.

Spokes are fitted with 14-in. long by 1-in. dia. steel rods weighing about 6 1/2 lbs. They act as sliding hammers to tap cuttings into the soil behind rippers mounted on the planter frame that run 8 in. deep just ahead of each wheel.

Cuttings are placed into slots at about 12 o'clock by riders standing on a platform mounted on front of the planter. When the cutting reaches 6 o'clock the hammer falls and taps it into the soil. A fixed steel band on the outside of the rim prevents the cutting from falling out of the spoke before the hammer taps it in. A pin welded to the weight and protruding through the slot in the spoke prevents the hammer from falling out.

Wheels are fitted with teeth, made out of cut-out sections of spokes, and lugs, made out of 3/8-in. dia. rod, to help maintain traction and, thus, uniform tree spacing. The planter is fitted with folding markers, which are made out of 1 in. sq. tubing with lawnmower wheels on the ends, to help ensure straight rows.

The machine was built to plant rows 5 ft. apart. Row widths could be changed by straddling rows, Chapman notes.

Cuttings are planted 7 in. deep in spring and are harvested when they're 6 1/2 ft. tall in late fall or early winter. They're sold to farmers for shelter belts, and communities for various tree-planting projects.

The only parts we bought for the planter were rims, hubs, bolts and paint," he says. "The lugs on the wheels are showing fatigue cracks after only two years. I'll have to replace them with something more substantial before next season."