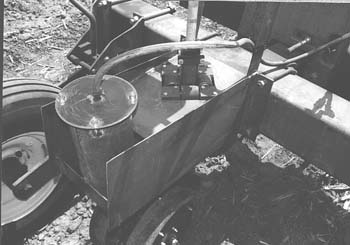 "It completely eliminates the need for parallel linkage which allows the row units to be spaced much closer together than on conventional planters," says Marshall Litchfield, Macomb, Ill., who's developed a new "air pressure" planter that he plans to use to plant soybeans in 10-in. rows.

Litchfield tested his idea for the first time last spring, mounting a 1-row experimental unit on a short length of planter toolbar. Air pressure is used to force the disc openers into the ground as well as to apply pressure to the closing wheels.

Key to the system is a 6-in. dia. "air canister" -- the kind used in air bag suspension systems on trucks. The canister mounts directly above the gauge wheels and has an air bag inside that's filled by a pump. The air bag pushes down on a vertical steel rod that's connected to a steel "balance bar" assembly that runs from the gauge wheels all the way back to the "V" closing wheels. A small horizontal bar connects the rod to the disc opener and is hinged at both ends, allowing it to transfer downpressure applied by the rod directly to the disc opener.

The air bag applies a constant amount of downpressure to the entire row unit, just like parallel linkage arms do. The only difference is that there are no downpressure springs and no linkage arms to take up space.

"I used it to plant soybeans and sweet corn this year and it worked good. It will make it possible to plant 10, 20, or 30-in. row crops with the same planter," says Litchfield. "The design might also work on a grain drill. I plan to test it on my 30-ft. drill and use the drill's monitoring system. I think it'll provide much better depth control for narrow row beans than you get with a conventional drill. It does have more moving parts than a conventional row unit so we'll have to see how well it wears.

"The air bag has about 8 inches of up and down stroke. About three fourths of the downpressure it applies is transferred to the disc opener and the rest to the depth gauge and closing wheels. I use a valve on the pump to adjust air pressure. I usually keep it at about 20 lbs. which generates about 400 lbs. of down pressure.

"One advantage of my system is that it can withstand sideways stress much better than parallel linkage. The rollers mount in a diamond pattern that's offset to the direction of travel in order to equalize the pressure on all of them.

"I run a big, single seed firming wheel ahead of the 'V' closing wheels, instead of a conventional small seed firming wheel. It's less sensitive to variations in down pressure and rolls better in wet soil without dragging."

To build the test unit, Litchfield used the support wheels and "V" closing wheels off an old Deere corn planter, the seed box off an Allis-Chalmers planter, and the gauge wheels off an International planter.