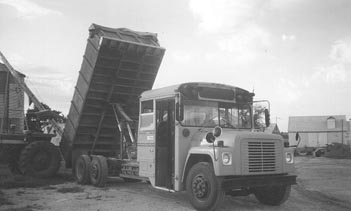 "It works as well as any conventional heavy duty grain truck but cost a lot less," says Armin Scripter, Abilene, Kan., who turned an old 65-passenger school bus into a 350-bu. grain truck.

Scripter started with a 1977 International 1700 school bus equipped with a 392 cu. in. engine and automatic transmission. He removed everything except for the front portion of the bus and the frame. He unbolted the rear 10-in. section of the bus body, moved it forward, and rebolted it just be-hind the first row of seats to form a cab. He mounted a 17-ft. truck bed and hoist on the open frame behind the cab. He then mounted a pusher axle -- made from the front axle from another bus -- in front of the rear wheels. The bus's power steering pump is used to operate the dump hoist.

"It gets a lot of attention and didn't cost much to build," says Scripter. "The bus's yellow color makes a nice contrast with the red truck bed. I bought four buses and originally planned to use them for storage. I made the conversion when I needed another truck. We use it to haul grain from the field to our bins and from the bins to town. By mounting homemade steel sideboards off another truck I can haul up to 400 bu. with it. The extra pusher axle helps distribute the weight and reduces compaction in the field.