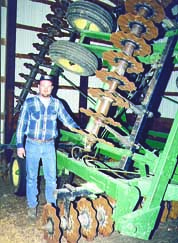 "They do a much better job of drying out wet soils than the straight coulters on a conventional disk, allowing us to plant no-till beans earlier than we ever could before," says Dean Buzzard, St. Elmo, Ill., who mounted 20-in. dia., 1 7/8-in. wavy no-till coulters on his 34 1/2-ft. wide Deere disk. The coulters are normally used on no-till planters and drills.

Buzzard gives most of the credit for the idea to Alen Ragle of Loogootee, Ill.

He bought the Deere 235 disk used at a sale and purchased new wavy coulters from Nichols Blades of Bloomington, Ill. The wavy coulters are designed to mount on round shafts. However, the disk was equipped with a square shaft so he had the manufacturer cut square holes in a set of coulters to match the disk's shaft. Buzzard spaced the wavy coulters 9 in. apart, offset on two gangs.

"They do a great job of airing out the soil," says Buzzard. "We use it 24 hours before planting no-till beans. We use a 275 hp Deere 9100 4-WD tractor to pull it at about 8 mph and run it at an angle through the field. We don't use it on corn ground because we plant corn conventionally. In the past we tried using a conventional disk to dry out the soil. However, we found that we had to make two passes, which packed the soil. Also, the straight coulters tore the ground up so bad that we had to come back later with a field cultivator to break up clods and slabs.

"We made a second unit out of a Deere 330 disk. We find that Deere disks work best because they have square frames instead of angled ones.

"We used 85 coulters on each disk so our total cost was minimal."