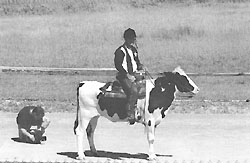 Cow racing could be the next big rural sport, if reaction to a recent wild and crazy event called "The Udder Race" is any indication.

Spectators at the race in Ithaca, Michigan witnessed the performance of what organizers say is the world's fastest cow. The people at the Guinness Book of World Records are currently considering the record.

Film clips of the exciting and humorous race were seen across North America on television, and event organizers Pete Ondrus and his wife Barb Lambert, have had feedback from as far away as Dublin, Ireland.

"We call cow racing a poor man's sport. You don't have to spend thousands of dollars like you would to buy a horse," says Ondrus. "It's fun for adults or kids, and it's environment-friendly. When you can't race your cow anymore, you can either milk them or eat them."

The 66-year-old Ondrus is a retired Carson City, Mich. dairy farmer who once milked 500 cows. As a member of his County Board of Commissioners, he suggested cow racing as a way to boost fair attendance. The rest of the board just laughed.

"But I never stopped thinking about cow racing and checking each edition of the Guinness Book of World Records, which still contains no such category. They recognize the world's fastest snail and the fastest ostrich, and I thought, why not a category for cows?"

Ondrus sold his cows in 1996, found he had more time to pursue his dream, and decided to make it a reality. Prior to the Ithaca race, he and Lambert formed the Mid-Michigan Cow Racing Association (MMCRA) as well as the World Wide Cow Racing Association (WWCRA), to exercise official control over cow racing. They copyrighted those names, drafted a set of rules and created a website.

There is a set of rules for a youth race (10 to 15-year-olds) as well as another for adults. Ondrus says the race animals must be female bovines, so that means they could be dairy, beef or even buffalo.

The first race turned out to be huge success. Six cows (five Holsteins and one beef cross) and their jockeys gave it their all in two heats, much to the delight of more than 500 spectators.

In the victory circle following the race, he downed a complimentary bottle of milk while Taffy looked elegant in her classy winner's wreath of flowers.

As reported in the Grand Rapids Press and Gratiot County Herald, "When the race started, one cow immediately bucked off her rider, Dennis Vanderhoff from Vermontville. Undaunted, he ran about an eighth of a mile to catch up to his mount, jumped back on, and restarted the race. He finished last."

"Another cow bolted across the infield. But Taffy plunged ahead at a fast walk, occasionally breaking into a gallop for the two laps around the half-mile track, pausing to sniff a wet spot and once veering toward the rail, apparently hoping to be petted."

All of the racecows wore saddles (either English or Western) and bridles, but some of the riders found they needed to make slight modifications to keep the saddles on their cows. Some put one rope around the back and under the tail, and another around the belly. The cow's skin is so loose, the saddles move a lot, so riders need to have good balance.