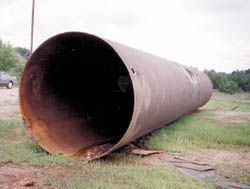 If you need a large culvert to replace a small bridge or to make a crossing on a creek or other water way, you might want to consider using a railroad tank car.

"An old tank car with the ends cut off makes an ideal culvert. They're made of high quality steel at least half an inch thick. Some have 7/8-in. thick walls. They're stronger than corrugated culverts of comparable size, so they don't have to be handled so carefully," he adds.

Smith says tank car culverts are available in 7 to 10-ft. diameters and in lengths from 30 to 63 ft.

The ends are removed along with any plumbing or valves attached to the tank. Cutting off the dome on top leaves about a 2-ft. hole that usually must be covered or welded shut by the buyer. "If you can put the culvert into place with the dome hole down, it doesn't need to be covered," Smith notes.

"My main customers are county road maintenance departments, farmers and timber companies. I've seen counties use one, or even two or three to replace old bridges. Those old bridges must be inspected periodically and are in constant need of repair to keep them safe. Farmers use the tanks to make crossings in creeks and field ditches and to cross irrigation canals. Some actually put them together end to end and bury them to make underground irrigation canals or reservoirs. Some farmers have made runs as long as about 200 ft. with them. If they're going to do that, we leave one end on the tank that will be the end of the canal.

"Timber companies like them because they can use them to get logging trucks and big machinery into areas where they're cutting. And if they don't want to leave them in place once a stand of timber has been harvested and replanted, they can dig them out and move them to other areas to reuse," he says.

"They don't need reinforcement when you're handling them, or support while they're being installed, as corrugated culverts do.

"In fact, they can be pushed into place with a dozer. If they get clogged, you can clean them out with a backhoe. That would ordinarily damage a corrugated culvert."

Smith sells tank car culverts depending on the diameter and thickness of the tank. He says delivery is extra. He can usually arrange delivery within two weeks. "When someone calls me for a price, I give them a total for the culvert and delivery, so they know what their final cost is going to be."

Smith also sells retired flatcars for use as bridges.