Hay "Macerator" Now On The Market 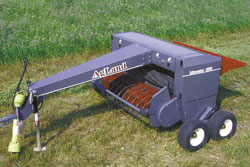 For years, university researchers have been testing a concept called hay "maceration". Maceration gently nicks stems and leaves, allowing much faster drydown while preserving valuable nutrients and color. Now there's finally a machine on the market.

The Macerator 6600 has a 66-in. wide pickup. Behind the pickup is a pair of rubber intake rollers, followed by a pair of steel rollers. The distance between each set of rollers is controlled by air bags. The machine is equipped with an air tank and three control gauges. One shows tank pressure, and the other two monitor pressure on the two sets of rollers.

"It lets you get your hay crop off the field faster while maintaining better quality," says Irwin Kornelsen, AgLand Co., Arborg, Man. "The concept was originally researched by the University of Wisconsin and by the Prairie Agricultural Machinery Institute (PAMI) in Canada. We bought the manufacturing rights from PAMI. We made four prototype models last year and they worked great. We plan to go into full production this winter. Future plans call for adding a 96-in. wide model."

According to Kornelsen, the machine is designed to be used three to four hours after you cut a crop. "It reduces normal drydown of a hay crop from five days to just one day. In good drying conditions, it can reduce hay moisture content to just 18 percent within 24 to 36 hours. The faster drydown helps preserve both nutrients and color. It makes the hay more palatable and increases digestibility which translates into increased energy, significant weight gains, and increased milk production."